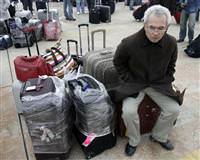 Following are details of countries evacuating nationals and employees from Libya or closing operations because of the political turmoil.

A source at the energy ministry said that by Monday afternoon, all staff had been pulled out of Ghadames, which lies close to the Algerian-Libyan border.

BOSNIA: Two Turkish boats carrying a total of 110 Bosnian citizens stationed in Benghazi arrived late on Sunday in the Turkish port of Marmaris. Another boat carrying around 30 Bosnians left Ras Lanuf on Monday for Malta. More than 260 Bosnians arrived in Sarajevo early on Friday on flights from Tripoli.

-- Another 20 Bosnians left Libya at the weekend on Turkish, Spanish and German flights. Bosnia is awaiting permission to organise another evacuation flight from Tripoli, the Foreign Ministry said.

-- The British frigate HMS Cumberland has set sail for Malta after a second trip to the Libyan port of Benghazi where it picked up about 200 civilians from various countries, including about 50 British nationals, Fox said.

-- Most British nationals who want to leave Libya have done so and only small numbers remain.

BULGARIA: Bulgaria is sending a government plane to Tripoli on Monday to evacuate its citizens, the foreign ministry said. Bulgaria has already organised two flights to Tripoli, evacuating some 111 Bulgarians, 70 Croatian, Serbian and Macedonian citizens, two South Koreans and 10 Chinese. There were around 1,500 Bulgarians in Libya.

CANADA: Canada says it has evacuated more than 230 Canadians from Libya and has moved additional aircraft into the region that can reach Canadians working in more remote areas.

CHINA: About 29,000 Chinese nationals have left Libya, but only 2,500 have so far returned to China, with the rest in neighbouring countries, state news agency Xinhua said on Monday.

-- A Chinese frigate has passed through the Suez Canal on the way to Libya to "provide support and protection for the ships evacuating Chinese nationals," Xinhua added.

-- The Commerce Ministry has said 75 Chinese companies have operations in Libya and China had evacuated almost 16,000 of its citizens by Saturday.

CROATIA: Croatia said 28 Croatian workers have left Benghazi on an Italian military ship bound for Malta. A plane from Zagreb landed in Tripoli and Croatian officials were trying to reach the remaining workers at three different sites. There are around 125 Croat workers still in Libya.

GERMANY: Two hundred staff from German and international companies were evacuated from Libya at the weekend by two German military aircraft and one British army plane, from a Wintershall camp in the desert 1,000 km south-east of Tripoli, a Wintershall press release said on Sunday.

-- Some 100 Germans remain in Libya, half of then in the interior.

GREECE: The Greek passenger ship Nisos Rodos with 390 evacuees on board, mainly Brazilians and Filipinos but also Thai, Portuguese, Dutch and Britons, docked at Piraeus on Sunday. Two more ships, the Hellenic Spirit and the Olympic Champion, took more than 4,000 Chinese and other nationals to the Greek port of Heraklion on the island of Crete.

-- India also chartered two passenger ships with a total capacity of 2,800 and is sending two navy ships from Mumbai to assist with the evacuation. There were 18,000 Indians in Libya, mostly in the oil, construction and health sectors.

LEBANON - Eighteen Lebanese arrived in Beirut on Sunday from Libya via a Royal Jordanian flight from Amman. A number of other Lebanese in Tripoli airport are waiting to board a flight for Paris and are expected to arrive in Beirut in the next 48 hours.

NETHERLANDS: The Dutch foreign affairs ministry said on Monday there were seven Dutch nationals left in Libya who wished to be evacuated. They were spread out across the country and the ministry was working with other countries to help them leave, it added. Dutch builder Royal BAM safely evacuated all of its approximately 200 foreign employees from Libya over the weekend, a company spokesman said on Monday.

NIGERIA: The National Emergency Management Agency (NEMA) said it planned to evacuate 2,000 of its stranded nationals, the first 499 of whom arrived back in the capital Abuja aboard a chartered Boeing 747 on Sunday. NEMA Director-General Muhammad Sani-Sidi told Reuters it was a voluntary evacuation and the 2,000 were Nigerians who had registered a desire to leave. He estimated the overall Nigerian population in Libya at 10,000.

SERBIA: Around 170 Serbian citizens on Monday departed Ras Lanuf on a Montenegrin boat, while another 94 Serbs will be taken to Malta on a Greek boat, Serbian Interior Minister Ivica Dacic said. Twenty-one Serbs arrived in Turkey on a Turkish boat on Monday, and 15 Serbs who remained in Sirte are to be evacuated by a Bosnian plane.

SYRIA: Syria has sent two ships to pick up Syrian nationals from Libya, and is continuing its flights to Tripoli.

VIETNAM: Vietnam has evacuated about 1,300 of its citizens from Libya out of 10,482 living and working there.

INTERNATIONAL FEDERATION OF THE RED CROSS:

-- The world's largest disaster relief organisation said on Saturday 25,000 people had crossed from Libya to Tunisia.