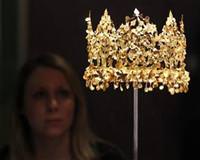 Even in the chaos and violence of war there is hope. That is the message running through a new British Museum exhibition of Afghanistan's ancient treasures thought lost, destroyed, or looted over the past 30 years.

The collection of 200 priceless artefacts spanning 4,000 years of history, from enameled Roman glass goblets, stunning solid gold headdresses and polished stone tableware from Egypt, were saved by a handful of Afghan officials who risked their lives hiding them.

In ancient times, the country was the crossroads linking Asia to the Middle East and Europe. Sitting strategically along the heavily trodden trade routes, now known as the Silk Road, it was here that goods were exchanged -- including lacquer from China, ivory from India and luxuries from Roman Egypt.

Preservation of this enormously rich cultural heritage against all the odds is a theme revisited throughout the show which has toured internationally since 2006.

Included for the first time is a set of stolen first century Indian ivory furniture carvings bought on the antiquities market by a London dealer only last year for an undisclosed sum, specifically with the intention of returning them. They have rarely been seen in public before.

"An individual has gone out and retrieved what is probably the largest single group of antiquities that were known to have been looted from the national museum in Kabul during the civil war between 1992-1994 and has gifted them back," curator and show organizer StJohn Simpson told reporters.

The show begins with a 2nd-century BC limestone statue of a youth with long flowing hair and Macedonian sombrero-like hat on his back.

It comes from a Hellenistic Greek city -- later known as Ai Khanum in Uzbek -- founded in Bactria on the Oxus river, northern Afghanistan, by one of Alexander the Great's generals Seleucus I. The Macedonian king had led his army into Asia in the 4th century BC to conquer the mighty Persian empire.

Already badly damaged when it was found by archaeologists in 1971 it was pieced back together and exhibited in the National Museum in Kabul.

In 2001 it was smashed by the Taliban who were obliterating any form of human imagery under a strict interpretation of Islam, including the colossal Bamiyan Buddha statues in the center of the country.

The classical bust was recovered by Afghan officials who carefully restored and concealed it along the other mesmerizing treasures unearthed by archaeologists in the last century.

All the objects displayed were feared lost during the Soviet invasion in 1979 and the civil war that followed when the national museum was hit by rockets, before the Taliban later ransacked it.

British Museum Director Neil MacGregor said of the Indian ivories displayed at the end of the show: "We wanted to present this narrative of creation, of exchange, destruction and recovery -- we wanted to end that on a note of hope."