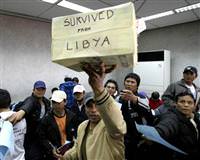 An exodus of foreigners fleeing an uprising against the rule of Libya's Muammar Gaddafi has left factories empty, fishing boats idle and construction unfinished.

An army of Egyptian, Chinese, Bangladeshi, British and other expatriate workers have fled the often bloody protests, squeezing Libya's food supplies and forcing businesses to close.

Production has stopped completely at the Abu Baker Albilah factory in Libya's second city of Benghazi, after the Syrian and Egyptian workers who make up over half the staff left. The factory makes baking powder, pepper and other foodstuffs.

"In normal days it doesn't look like this," said Faraj Al-Bilah, the factory owner's son, as he gestured to a depleted supply room, a few stacks of sugar and vinegar cases still placed on the mostly-bare shelves.

The factory floor was vacant, the lights switched off, the doors locked. Crates of peanuts sat waiting to be delivered.

Workers from Egypt do much of Libya's farming, and fresh produce is scarce in the few shops still open, leading some experts to warn of food shortages within weeks.

Empty fishing boats sat moored and unused, rocking against the dock at one of Benghazi's ports. Remaining fishermen said the others who had worked there were overwhelmingly Egyptian and Syrian and that they had fled after the unrest began.

"There used to be thousands of fishermen in this area, now there are only about five or six," said fisherman Samir el-Soury.

Expatriate workers are vital to the economy of the country with a population of 6.4 million. Egyptian workers alone account for at least one million laborers, according to the Egyptian Foreign Ministry.

Not all foreign workers have left Libya, and at a power plant in Zueitina, Korean and Bangladeshi workers said they felt safe after local youths volunteered to work as security guards.

"I want to stay here. The Zueitina people are fully supporting us and are providing food and security," said acting site manager Nam Kim, who works for Korean firm Daewoo. But at the Zueitina oil export terminal nearby, employees of foreign oil service firms have fled, security guards said. A huge portrait of Gaddafi at the terminal gates had been torn to shreds, the plastic fluttering in the wind.

OPEC member Libya usually produces 1.6 million barrels of oil per day and is the 12th-largest exporter in the world, but political unrest has halted exports from some areas and depressed flows from others.

Youssef Gherryo, a manager at east Libyan oil firm Agoco, told Reuters: "I would say we can run things for a month or two, not more than that. But if we have to increase existing full capacity, we will need expat assistance."

On a road out of Benghazi, posters advertise the building of a new high-speed rail network for the city, but a witness said construction had stopped after expat workers left.

On the same road, an eerie town of identical, half-built concrete apartment blocks stretches into the distance. Row upon row of buildings stand empty, after the thousands of Chinese workers at the 20,000-housing unit project fled.

Packets of Chinese food were strewn across the forecourt of the site, where a red gate with Chinese letterings still stood. Yards away was a smashed, graffiti-covered security office and a burned out car.

Volunteers had taken up posts around the site, working in shifts to stop looting. Some items had been stolen, but valuable mechanical diggers, trucks and other machinery were intact.

"We're here protecting the equipment of the company till they get back. Our relations with China are great, and we want them to come back and finish the project," said volunteer guard Mohammed Abdullah.