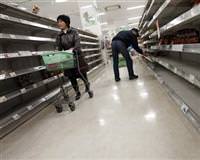 As Japanese authorities struggled to avert disaster at an earthquake-battered nuclear complex 240 km (150 miles) to the north, parts of Tokyo resembled a ghost town.

Many stocked up on food and stayed indoors or simply left, transforming one of the world's biggest and densely populated cities into a shell of its usual self.

"Look, it's like Sunday -- no cars in town," said Kazushi Arisawa, a 62-year-old taxi driver as he waited for more than an hour outside an office tower where he usually finds customers within minutes. "I can't make money today."

Radiation in Tokyo has been negligible, briefly touching three times the normal rate Tuesday, smaller than a dental x-ray. Wednesday, winds over the Fukushima nuclear-power plant gusted out to sea, keeping levels close to normal.

But that does little to allay public anxiety about an ailing 40-year-old nuclear complex with three reactors in partial meltdown and a fourth with spent atomic fuel exposed to the atmosphere after last Friday's earthquake and tsunami.

"Radiation moves faster than we do," said Steven Swanson, a 43-year-old American who moved to Tokyo in December with his Japanese wife to help with her family business.

He is staying indoors but is tempted to leave. "It's scary. It's a triple threat with the earthquake, tsunami and the nuclear radiation leaks. It makes you wonder what's next."

A number of major events have been canceled, including the World Figure Skating Championships, Japan Fashion Week and the Tokyo International Anime Fair whose organizers cited "extreme circumstances."

Some foreign bankers, flush with money, are fleeing fast, some on private jets. BNP Paribas, Standard Chartered and Morgan Stanley were among banks whose staff have left since Friday, according to industry sources.

"I got a request yesterday to fly 14 people from Tokyo to Hong Kong ... they did not care about price," said Jackie Wu, chief operations officer at Hong Kong Jet, a newly established private jet subsidiary of China's HNA Group.

Electronics shops are selling out of small, portable Geiger counters that measure radiation. Strawberry Linux, a Tokyo-based company, is out of stock, said its owner, Masahiro Ochiai.

Some areas of Tokyo were hit by rolling blackouts and reduced train services as the nuclear plant's operator, Tokyo Electric Power Co, struggled to make up for a drop in power capacity.

At Sony Corp's headquarters in Tokyo's Shinagawa district, only 120 staff of the usual 6,000 were working. Staff were told to stay at home as much as possible due to difficulties with train transportation, said Sony spokeswoman Mami Imada.

In Akasaka, normally packed with office workers, sushi restaurants and noodle shops, streets were quiet into the night when the area usually becomes a neon-lit entertainment district.

"Akasaka has been dead quiet since the quake. We should be thankful we are alive but if this continues, the economy will be a disaster," said Akihiro Sumitani, owner of a shop that sells kitchen utensils.

"I seriously worry how many shops can survive."

People stocked up food, milk and other supplies, emptying some shelves at convenience stores and supermarkets. Some residents towed suitcases. Thousands showed up at nearby airports without tickets, hoping to book flights out of Tokyo.

Anthony Blick, an expatriate in Tokyo working from home since the earthquake, said he would prefer to leave.

"I'm worried about the nuclear reactors in Fukushima. There's a lot of information out there but unfortunately a lot of it is conflicting. Ideally, I would like to get out of Japan but that isn't practical at the moment."

Many schools were closed, but one mother interviewed outside an open kindergarten said she preferred her children in school.

"I want them to do everything that we are allowed to do as long as it is safe," she said. "If I show them that I'm nervous, my children will get nervous."