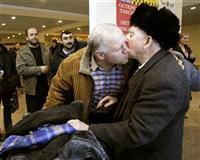 In business, the first thing we do when we meet someone is shake hands.

While it seems simple enough, this "first impression" greeting sends a powerful message about you and your respect for others.

For the most part, the western-style handshake is the accepted form of greeting in the international business world. However, the manner in which it is performed varies from country to country.

Your understanding of the subtle, and not-so-subtle, differences, as well as the traditional greetings of a country, conveys a great deal. It sends a message about how you view and value a culture and whether you respect your colleagues and potential partners.

The Bottom Line? Failing to be sensitive to this "first impression gesture" can have a lasting negative effect on your future dealings.

Try to avoid looking anxious while waiting for your cue. While most international encounters begin with a western handshake, followed by the county's traditional greeting, it may just end after the western greeting.

When doing business outside the United States, make sure you shake hands with everyone you greet and greet everyone in the room. Failure to do so is considered a rejection of those you omitted, and will be noticed.

Also, be sure to shake hands upon arrival and departure.

When meeting associates in the U.S. a firm handshake is preferred but when traveling abroad it's a different story. Here are a few ways you might be greeted by others when doing business abroad:

CHINA - While the western handshake is accepted, it is performed with a lighter grip and a pumping motion. Chinese also lower their eyes slightly as a sign of respect when meeting someone. Staring into their eyes can be perceived as a sign of disrespect.

JAPAN - Both handshaking and bowing are accepted forms of greeting in international business circles so take your lead from the person you are meeting. If shaking hands, do so lightly. If you are greeted with a bow, respond by bowing in kind.

RUSSIA - Russians usually use a firm (sometimes very firm) handshake when meeting a guest. If you've met the person before don't be surprised if the greeting includes a hug. Russian men customarily kiss their guest's cheeks (men and women alike) while women reserve such intimacies for other Russians and simply shake hands with foreigners.

LATIN AMERICA - Latin Americans use a light, lingering handshake (about twice as long as an American handshake) and pulling away too soon is interpreted as rejection. A man may offer his hand to a woman, and he may "kiss" the top of a woman's hand.

EUROPEANS - While their handshake is the western style, eastern and western Europeans re-shake hands whenever they are apart for a period of time. For example, it is considered polite to shake hands when you leave for lunch and when you return.

ARAB COUNTRIES - Male friends may embrace and kiss each other on both cheeks following a light and lingering handshake. They also stand very close to one another when talking. If you are a non-Arab woman traveling to an Arab country, let the man offer his hand first because some Muslim men do not shake hands with women. Many Arab business women who often travel to Western countries shake hands with men and women. Let her offer her hand first.