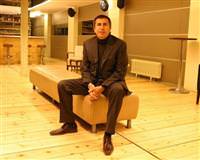 The Istanbul Doors Group, which operates some of Istanbul’s most famous restaurants including Kitchenette, Zuma, Vogue, Anjelique, Gina, Da Mario, Mama, Wan-Na and A'jia Hotel and Foodist Catering has now signed onto a partnership with London’s Michelin-star chef Tom Aikens.

After last week's deliberations regarding the partnership which
brought to light, now with the contract signed, Istanbul Doors has opened their proverbial doors to Europe.
According to the European press, with the partnership between two-star Michelin chef and the youngest to hold that title, Tom Aikens will also be bringing his own brand, which includes Tom's Kitchen, Tom's Deli, Tom's Terrace and Tom's Events to the region. According to one of the firm's partners, Rıza Büyükuğur, they have already opened a company in London called London Doors. "Our first objective is to grow in Europe; the center of our sector is in Europe." Büyükuğur also stated that they have plans to bring Kitchenette to London as well.