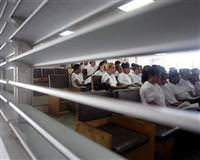 Speaking English is increasingly a basic requirement for participating in international business, but a new study shows large gaps in English skills around the world.

Scandinavian countries have the best command of English among countries where English is not the native language, while Russia, Turkey and South American countries lagged, according to a study released on Wednesday by EF English First, the world's largest training school.

China and India performed worse than expected, despite their large investment in private English training, ranking 29 and 30 respectively out of 44 countries. Although analysts say that China is on the cusp of becoming the world's largest English-speaking nation, its proficiency level still lags behind South Korea, Japan, and Western Europe.

India performed no better than China, despite its history as a British colony.

Northern Europe led the pack, with more than 90 percent of students required to study English as part of coursework. But Italy and Spain lagged behind the rest of Europe, ranking 23 and 24.

The study found a strong correlation between income levels and English proficiency, which the study's authors say is both cause and effect. Richer countries have more money to spend on education, resulting in better English training. This in turn results in more economic opportunities on a global level.

"For developing countries to compete successfully in global industries and capitalize on the business outsourcing boom, the ability to produce large numbers of skilled graduates who are able to communicate in English must be a top priority," he said in a statement.

Latin America performed the weakest in the English tests, but the study pointed out that the region already had a common language, Spanish, which may decrease the incentive to learn English.