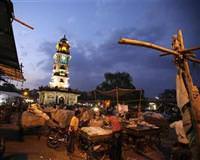 Got 48 hours to explore Jodhpur, the second largest city in the north Indian state of Rajasthan?

Internationally known for polo matches and the traditional riding trousers worn by its players, one of Jodhpur's greatest attractions is a fairytale fort.

Perched on a hill-top, on the edge of the Thar Desert, the fort looms over the indigo walls of the chaotic old town that have earned Jodhpur the nickname of the blue city -- as opposed to Jaipur, the pink city and Rajasthan's capital. Reuters correspondents with local knowledge give you some tips on how to spend 48 hours there:

Saturday 8 a.m. If full authenticity is your aim, breakfast from the hot snack and chai sellers that greet every arriving train.

Drop off your bags wherever you're staying. Options range from cheap and noisy hotels among the blue buildings of the old town to the hushed, five-star Umaid Bhawan, which is also home to the maharajah.

Somewhere in between, you could try the Devi Bhawan -- a roughly 100 rupee ($3.54) ride, or less if you're game for some aggressive haggling, in an auto rickshaw from the station.

Jodhpur's rickshaws stand apart from the more utilitarian models of say Delhi. They are bigger and decorated with mirrors and pictures, according to the tastes of drivers who know the width of their vehicles to the millimeter -- most of the time.

10 a.m. From your hotel, a short rickshaw drive takes you up to the Mehrangarh fort.

Founded in 1459 by Rao Jodha, who gave his name to Jodhpur, it has been home to the senior branch of the Rajput clan, known as the Rathores, for more than five centuries.

The casual visitor can easily spend a day there in the company of an audio guide (included in the 250 rupee entrance fee), which unashamedly relays the romance of the place, summed up in a quote from British imperial writer Rudyard Kipling.

He described Mehrangarh -- whose name means fort of the sun, believed to be a reference to the Rathores's mythical descent from the sun god -- as the work of angels and giants.

And devils, he could have added, given that for all the wonders, there are also horrors, although the mellifluous audio guide tends to make light of them.

One of the first shocks is the painted wooden carvings of hands near one of a series of gates.

They are the hand prints made by widows who followed their husbands' corpses out of the fort to commit "sati" -- killing themselves by leaping onto their husbands' funeral pyres.

The initial prints were later carved as permanent mementoes.


So many women were widowed in spite of fortifications, which ensured Mehrangarh was never taken by force.

A vast array of weaponry is displayed in an armory. Beautifully engraved, they are works of art, as well as of devastation. Less brutal treasures include ornate howdahs, the seats for sitting on elephants, and palanquins (or litters) for carrying the maharajahs.

Howdahs, together with elephants and other trappings of royal life, are also depicted in a display of Rajput art that leads up to the magical Phul Mahal -- an elaborate gilded room with stained-glass windows.

A few more stairs lead to an inner sanctum, where the women were carefully guarded by eunuchs. They could look down wistfully through delicately carved sandstone screens on to the city and sprawling Thar Desert.

1:30 p.m. Lunch is available at the fort's cafe, which serves Rajasthani thali, a collection of curries in metal dishes with rice and Indian bread -- and western alternatives.

Afterwards, you might contemplate a walk round the extensive ramparts, while eagles circle above your head.

There is also a garden -- full of leafy banana trees and a well that seems almost as deep as Mehrangarh is high.

4 p.m. From the fort, you can look across to the Umaid Bhawan, completed in 1943, making it the most recent of India's great palaces. It is home to Maharajah Gaj Singh II, current head of the Rathore clan and custodian of the fort.

It also has a museum, open to the public for a small fee (50 rupees), and a lavish hotel, which you can only enter if you are a guest or have a restaurant reservation.

While you may feel it lacks Mehrangarh's nobility, Umaid Bhawan is an instructive contrast.

Its exhibition documents a playboy, rather than a warrior lifestyle. Included are elaborate wine lists for state dinners and memorabilia from Jodhpur's polo matches and its flying club.

5:30 p.m. In the cool of the evening, it's time to see how the mass of Jodhpur's population lives in a labyrinth of alleyways whose entrance is marked by a clock tower built by a 19th century head of the Rathore clan.

Anything and everything is on sale in hundreds of tiny shops that border lanes, where school children in crisp uniforms, jostle with rickshaws, goats, sacred cows and lost tourists.

7 p.m. If you still have an appetite for bustle, you could dine near the old town at the Priya Hotel, whose thalis have been widely praised.

Alternatively, retreat to the Devi Bhawan for the calm of its terrace and gardens and a simple menu, which includes the ubiquitous thali as well as other Indian and western staples.

India's cities are expanding at breakneck pace, but millions more live in the villages, meaning you cannot hope to understand India without taking a look at its rural way of life, as our guide Deepak from bishnoivillagesafari.com explained.

The Bishnoi is a sect that dates back to the 15th-century and is a generic name for trips to villages around Jodhpur even though they do not necessarily include a Bishnoi settlement.

Deepak, who comes from a farming village where land is being sacrificed to Jodhpur's expansion, took us not to his own village, but on a tour of potters, weavers and textile sellers.

As he repeatedly stated, purchases were not necessary, but retail opportunities were as plentiful as the cultural insights.

8:30 a.m. Deepak collected us from our hotel in an old Russian jeep.

9:30 a.m. First stop Nandwan, a village of potters. The typical pottery we visited specialised in water jars, which naturally cool the contents.

A potter can produce more than a dozen a day, but that is a fraction of the number factories can churn out.

As the father of the family potted expertly on a wheel turned by hitting it with a stick, he chatted to his son about the need for him to find a different career.

10:30 a.m. From Nandwan, on to Salawas, where mothers and sons, husbands and wives sit on either side of a loom weaving dhurries, or mats, from cotton and camel hair.

The weavers we saw were part of the Pukhraj Durries cooperative and their subtle sales pitch proved irresistible.

12:30 p.m. Emerge blinking into the sunlight and in need of lunch. Lunch, as part of the safari, is an optional extra, well worth it for the extra insight it gives into village life.

Ours was served by the women who cooked it in the village of Jhalamand. We sat beneath trees next to a hay field and ate millet porridge, spiced sorghum, lentil daal and Indian bread.

2:30 p.m. In the heat of the afternoon, while away a few hours by the hotel pool (probably included even in a fairly moderate hotel, which may also offer Indian massage as another lazy afternoon option).

6:00 p.m. Drinks at On the Rocks, where Jodhpur's beau monde hangs out.

7:30 p.m. You could also dine at On the Rocks, but a nice end to your stay could be dinner at the terrace restaurant of the Mehrangarh fort. It serves a fine thali as well as other Indian and western dishes.

The menu, however, is almost irrelevant given the view down on to the city and the backdrop of the floodlit fort -- by night, eerie and even more imposing than by day.

When reluctantly you must leave, you could take a night train back to Delhi.

If instead, you fly out the next morning, grab a window seat for a rare chance to look down on the mighty Mehrangarh fort.