Turkey to open another airport 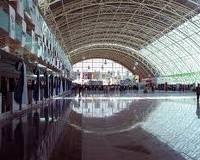 When finished, this new airport will become Turkey’s fourth largest. The foundation will be laid on Friday.

Situated in the Altıntaş district of Kütahya, the build-operate-transfer model Zafer Bölgesel (Regional) Airport's foundation will be laid tomorrow during a ceremony attended by Veysel Eroğlu, the Minister of the Environment and Forestry.

When the airport is completed, it will not only serve the Kütahya, Afyonkarahisar and Uşak provinces, but will also be Turkey's fourth largest airport.

The foundation-laying ceremony, which will be attended by Minister Eroğlu and three provinces' protocol, will take place on Friday at 14:00.