THY conducts first flight to Malaga with Emel Sayın songs 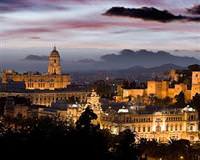 Turkish Airlines (THY) kicked off services to Malaga, Spain with a very special flight yesterday.

The THY flight, boarded by certain administrators, journalists and artists, departed Atatürk Airport to Malaga.
The flight was met by a ceremony upon its arrival to Malaga Airport. Famous performer Emel Sayın was amongst the convoy on the plane and upon a series of demands by fellow passengers, she succumbed to sing two of her much loved songs 'Çile Bülbülüm Çile' and 'Kız Sen İstanbul'un Neresindensin'. During an address to kick off the first flight by THY to Malaga, THY Executive Board Chairman Hamdi Topçu, announced their decision to extend their routes to fly to Spain the world's ninth largest economy, was paralleled with Turkey's initiative policy into global markets as well as due to the fact that a number of foreign companies collaborate with Turkish firms. Reminding that prior to Malaga, THY already began serving Madrid, Barcelona and Valencia, Topçu stated, "We had two flights a day to Madrid and Barcelona. We began flying to Valencia last month. After research, we realized that Malaga was also a feasible destination. Today, we have kicked off our first flight making this the fourth destination Turkish Airlines serves."