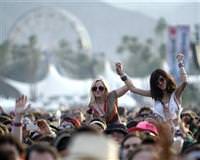 The music festival season is just around the corner and whether you're interested in rock, electro-pop, trance, jazz or dance, there's a festival out there to explore. Online travel advisers Cheapflights offer their top 10 choices. 1. Coachella Valley Music and Art Festival- Indio, California.

Located in the beautiful Indio Valley of Southern California, this three-day art and music event kicks off the festival season from April 15 to 17. Coachella has quickly become one of the United States' largest music festivals, encompassing six different stages all playing a variety of music from alternative rock to hip-hop to electronic. Don't be startled to find unannounced shows from artists like Kanye West, or loose flying pigs from Roger Waters. Coachella is sure to surprise you in more ways than one. (www.coachella.com) 2. Roskilde Festival- Roskilde, Denmark

Situated on the island of Zealand in the ancient Viking city of Roskilde, this summer event was originally founded by two high school students in 1971, and has gone on to become one of the largest music festivals in Europe. While Roskilde is typically known as a four-day rock event (June 30 to July 3), showcasing world-famous talent, its musical agenda expands every year to include electronic, hip hop and even world music. (www.roskilde-festival.com) 3. Soundwave Music Festival- Petrcane, Croatia

At Soundwave, pulsating electronic beats meet sun and sand getaway to create the ultimate three-day festival party from July 22 to 24. Although a popular spot for young adults, Soundwave is quickly becoming an international event attracting students from everywhere. But the party doesn't start in Croatia; it starts on the road. This festival has a specific route mapped out through Europe, including recommended stops, designed for Soundwavers to meet each other on the road. (www.soundwavecroatia.com) 4. T in the Park- Kinross, Scotland

This three-day rock event, July 7 to 11, has been known to sell-out in a little as 90 minutes and continues to grow every year, taking on as many as ten stages. T in the Park is not just a music festival, but also boasts remarkable fairgrounds with rides, games and concessions, so there's always something to do. And don't forget your sleeping bag, because the best way to experience this event is by taking advantage of the extensive campgrounds, situated amidst the gently rolling hills of Kinross. (www.tinthepark.com) 5. Festival International de Jazz de Montréal- Montreal, Canada

It's no surprise that Montreal is a favorite city among travelers, but consider going June 25 to July 4 and you'll witness one of the world's largest jazz festivals. Situated in the heart of the city, you can see big names in jazz at a variety of venues from small and intimate clubs, to massive outdoor stages. Much of the downtown area is blocked off from traffic for free and open-air performances, and kids are always welcome. (www.montrealjazzfest.com/default-en.aspx) 6. Sziget Fesztivál- Budapest, Hungary

Originally, Sziget started as a Hungarian music event created to boost the summer festival scene after the fall of communism. Now, it's gone on to become one of the most international music affairs in Europe. You'll find a stage for all genres, including world music, blues, jazz and rock. Conveniently located on an island in the center of Budapest, day trips into the city are a great way to add to the Sziget experience. This year's festival runs August 8 to 15. (www.szigetfest.com) 7. Summer Sonic Festival- Osaka, Japan and Tokyo, Japan

This relatively new festival has quickly become one of Japan's greatest musical events. Summer Sonic attracts a mix of local Japanese musicians and international rock stars, all representing diverse genres of music from Deep Purple to Lady Gaga. This two day event, August 13 and 14, is split up between Osaka and Tokyo, two of Japan's liveliest cities, so you'll find endless entertainment even when the music isn't playing. And don't worry about missing out on your favorite shows because all artists play at both venues. (www.summersonic.com) 8. Festival Internacional de Benicàssim- Benicàssim, Spain

Take the vibrant music and action of a rock performance and put it on the beautiful beaches of Spain, and you've got Benicàssim International Festival. Although Benicàssim is typically known as a rock, electronic and pop event, there are plenty of other things to do and see at the festival, including theater, short films and fashion shows. But if you like to be in bed by nine, this affair might not be for you; performances typically start at 5pm and end at 8am. This year's festival runs from July 14 to 17. (www.fiberfib.com) 9. Bestival-Isle of Wight, England

Nope, it's not Glastonbury and it's not Reading- it's Bestival. Probably one of the most eclectic festivals out there, Bestival offers an alternative and diverse option to the typical corporate music fest. This kid-friendly, four-day event (September 8 to 11) boasts music from renowned rock artists, as well as quirky tents and competitions. The most popular event is Fancy Dress, where attendees dress up in outlandish costumes. In 2010, 55,000 festival goers participated in Fancy Dress, and ended up breaking a Guinness World Record. (www.bestival.net) 10. Rock im Park/ Rock am Ring-Nuremberg and Nürburg, Germany

This three-day rock festival, from July 3 to 5, is the largest music festival in Germany and divides itself between two cities; Nuremberg and Nürburg. Both festivals occur simultaneously, so whether you prefer the tranquil scenery of Nürburg, or the historical city atmosphere of Nuremberg, it doesn't matter because all musicians play at both venues. (www.rock-im-ring.com)