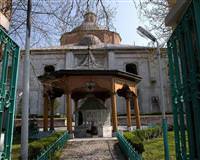 “Look,” my friend Wendy, pointed. “I wonder what they are!” We were strolling around the Grand Bazaar in Istanbul, Turkey and among all the glitz and glamour of the gold shops we had turned into a tiny side alley which had only three small stalls, crammed full with antiques.

At the entrance of one of them hung two arm-length, elaborately crafted, painted figures which seemed to be puppets. "Let's go and ask," I suggested. And, as luck would have it, the friendly shop owner who spoke quite good English was delighted by our interest. We were seated on plush, dark-red ottomans and the obligatory tea was served. He then told us the story of Karagöz and Hacivat. Those are the names of the two puppets we admired and they are the central figures of the famous Turkish shadow play. "You see," he said, "they were real people. They were workers under Sultan Orhan, building the Green Mosque in Bursa, Turkey. But, they were jokers and pranksters, always play acting and entertaining their co-workers. Which, unfortunately, meant, that very little work got done. One day, the sultan had enough and ordered them executed. Legend has it, that their co-workers were so depressed by the sultan's cruel act, that they created the shadow figures and performed plays in memory of Karagöz and Hacivat. The sultan also felt belated remorse and didn't forbid the plays."

"And all that happened in Bursa?" I asked. "Yes," he said, "you can see the whole story documented in a museum in Bursa". Wendy and I only need to hear the words "extraordinary museum" and we will be off. On the spot we decided to take a day trip to Bursa.

The city is only about 85 miles from Istanbul and you can either drive yourself, take a bus or, as we did, a ferry from Yenikapi to either Mudanya or Yalova and a short mini bus ride from there will take you right into the center of Bursa.

The ferry ride is a particularly pleasant way to get to Bursa. As we stood on deck, warmly wrapped against the winter cold but blessed with blue sky and sunshine, we could already admire the beauty of Bursa's location. The Sea of Marmara, with its stark white beaches, is a stunning sight. And then, later, while traveling on the mini bus, we came upon two vast lakes, each dotted with many, many fishing boats. After a turn in the road, the massive Ulugad mountains loomed in the distance. These mountains hold Turkey's most popular ski resort with a teleferique riding up to its peaks from Bursa. From a natural beauty point of view, Bursa really has it all, which may have been one of the reasons the city was the first capital of the Ottoman Empire following the conquest by the Byzantines in 1326.

Another reason might have been that Bursa was an old settlement, conveniently located at the western most end of the Silk Road and a thriving center of trade and commerce to this day. At the bus station, we got a map of the town and discovered that all of Bursa's most important sites are located along the perimeter of a huge triangle formed by Atatürk Caddesi on one side and Yeni Cumhuriyet Caddesi on the other, with the Green Mosque and Sultan's tombs at the apex.

Bursa, Turkey's forth largest city, is a wealthy town and it shows. The streets are wide, very clean and easy to walk under the shade of many, many finely trimmed oak trees. And, there are well tended flower beds and fountains everywhere in between. Surrounded by greenery, even in winter, it came as no surprise that Bursa is also referred to as Yesil Bursa (Green Bursa.)

Wendy and I love to explore on foot wherever possible, and Bursa's easy to negotiate layout encourages just that. At the corner of Cumhuriyet Cad. and Ulucami Cad., we came upon the covered bazaar, with its impressive arched entry ways and the usual variety of shops, many of them displaying the shadow theatre puppets. Then, we turned left and walked past several mosques until we came to a park with a huge fountain in the middle. And next to the park, another of Bursa's many attractions: the silk bazaar (Koza Han). It's a two story structure built in 1491 as a joint caravanserai and trade center. With a courtyard in the middle, several cafes invite visitors for a rest. The hand woven and hand painted silk scarves and clothes which are on offer in the shops around Koza Han, are of excellent quality and beauty. Opposite the shops are niches with more tables and benches set in a way to encourage locals to socialize and meet friends. After buying a silk scarf, each, we sat down and enjoyed a Turkish coffee and a Bursa specialty: candied chestnuts, which are cone shaped chocolate pralines filled with ground chestnuts mixed with sugar.

We then resumed our walk along Atatürk Caddesit in search of another Bursa landmark: the original Iskender restaurant. Because it was here, in Bursa, that the Iskender kebab was invented and the original restaurant, a pleasantly unassuming, small wooden structure with an open kitchen and much memorabilia inside, is still run by the family of Mr. Iskender. After the filling candied chestnuts, there was no room left for a kebab, so we admired the restaurant from the outside and then headed on towards the river and a lovely bridge. The bridge features several small boutiques, among them one where we could see how the shadow play puppets were made.

We then walked steeply uphill to the Green Mosque and the Sultan's tombs. They are impressive structures and, in my opinion, even more elaborate and beautiful than Istanbul's Blue Mosque, albeit a lot smaller. Cobbled streets with shops, carpet weavers, and sliver smiths surround the area.

Of course, we couldn't miss out on the Karagöz and Hacivat museum, but we had to take a taxi to get there. The road to the museum leads through Bursa's residential suburb which again reflect the wealth of the city with beautiful, well tended mansions, many with art deco windows and doors. The museum is a sight to behold. Located in a half wood, half stone little house, the ground floor exhibits some of the most fascinating puppets from all over the world. And, of course, the museum holds a vast collection of antique Karagöz and Hacivats as well as the over 5o other characters which can make up a single play. The guide, who is a puppet master himself, will happily answer all your questions and let you peek into the workshop where the puppets are made or repaired.

Across the road from the museum is a huge screen depicting the unfortunate pranksters in the place where they were executed.

Evening had fallen by now, so it was time to return to Istanbul. For our return journey, we opted for a four hour bus ride with its many stops along the way as well as a ferry leg at Yalova. Upon arriving at Istanbul's central bus station which resembles a small airport more than a bus terminal, we found excellent cafes and restaurants. It was here that we finally had our Iskender kebab. It was delicious, even if it wasn't from the original restaurant. While we didn't have a chance to visit the mountain resorts, the lakes and several more of Bursa's monuments, we had a thoroughly delightful day. The next time we visit Bursa, an overnight stay is clearly called for.