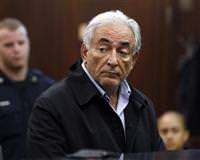 Dominique Strauss-Kahn has resigned as head of the International Monetary Fund, saying he needs to devote all his energy to fight charges that he sexually assaulted a hotel maid.

Strauss-Kahn's arrest in New York on Saturday dashed his prospects of running for the French presidency in 2012 and has sparked debate over the 65-year-old tradition that a European is appointed as head of the Washington-based global lender.

"I deny with the greatest possible firmness all of the allegations that have been made against me," Strauss-Kahn said in a resignation letter released by the IMF and dated May 18.

"I want to devote all my strength, all my time, and all my energy to proving my innocence."

Later on Thursday, the former French finance minister was to make his second request to be released on $1 million cash bail and placed under 24-hour house arrest until his trial on charges of attempting to rape a hotel maid, his lawyers said.

He is being held in New York's grim Rikers Island jail.

A police mug shot of Strauss-Kahn, 62, taken more than 24 hours after he was detained, showed him exhausted in a rumpled, open-neck shirt, his eyes downcast and half-closed.

The photograph is likely to fuel outrage in France over the way the man seen as a strong contender for the French presidency was paraded before the cameras in what is called a "perp walk" before he had had a chance to defend himself in court.

In a poll released in France on Wednesday, 57 percent of respondents thought the Socialist politician was definitely or probably the victim of a plot.

The woman Strauss-Kahn allegedly tried to rape, a 32-year-old widow from West Africa, testified on Wednesday before a grand jury. It will decide in secret whether there is enough evidence to formally press charges with an indictment.

WHO WILL HEAD IMF NOW?

Strauss-Kahn's resignation intensified debate over who should lead the Fund and whether it was time to ditch the practice, in place since the IMF was set up in 1945, that a European heads the IMF while an American is president of the World Bank.

French junior transport minister Thierry Mariani said on Thursday that Economy Minister Christine Lagarde would be a "very good candidate", but that it might be hard to have another French managing director "in the current context".

Swedish Finance Minister Anders Borg also endorsed Lagarde, a fluent English-speaker who headed a major corporate law firm in Chicago before joining the French government. She has so far declined to say whether she is interested.

Diplomats said Germany, Europe's biggest economy, favors Lagarde, but she is herself under a legal cloud after a public prosecutor recommended that she be investigated for her conduct in a business-related legal case involving an ex-politician.

Judges at a special court for ministers are expected to decide in mid-June whether to order a full-scale inquiry.

European Central Bank policymaker Nout Wellink said on Wednesday that outgoing ECB president Jean-Claude Trichet would make a "fantastic" IMF successor. However, IMF rules stipulate that the candidate must not be older than 65, and Trichet is 68.

Emerging economies, which are anyway demanding a greater say in how the IMF is run, have also been pressing for the global economy's financial manager to be drawn from their ranks.

China and Japan both called on Thursday for an open and transparent process "based on merit" -- a veiled way of opposing another European or U.S.-European stitch-up. Mexico, Brazil and South Africa have also suggested a new approach to selection.

"As agreed at G20, heads of international financial organizations and senior leaders should be chosen based on their ability through and open and transparent process, so I think a suitable person should be chosen through such a process", Japanese Finance Minister Yoshihiko Noda said.

Washington and Berlin have both suggested the IMF name an interim head, allowing more time to find a long-term candidate.

A German finance ministry spokesman said the next IMF head should come from Europe, but that emerging countries should provide successors in the long term.

John Lipsky, the Fund's number two whose term expires in August, is acting managing director until the IMF executive board selects a successor to Strauss-Kahn.

The vacancy comes at a sensitive time, given the IMF's dominant role in helping euro zone states such as Greece, Ireland and Portugal deal with massive debt problems.

Europeans argue that the euro zone debt crisis means it makes sense for them to retain the post for now.

Many ministers from Europe and emerging countries have paid tribute to Strauss-Kahn's decisive leadership of the IMF through the global financial crisis and the euro zone's troubles.

But in one jarring note, German economist Hans-Werner Sinn, head of the Ifo institute, told Bayern2 radio: "Strauss-Kahn was celebrated as a hero in Greece because he opened up the wallet so much ... Whoever succeeds Strauss-Kahn -- if it is not a French person again -- policy will be more restrictive."

New details have emerged about the sequence of events surrounding the alleged attack.

Strauss-Kahn left the Sofitel hotel near Times Square in Manhattan around 12:30 p.m. on Saturday and hotel security called police to report an alleged sexual assault about an hour later, a law enforcement source said.

New York investigators are questioning why officials at the hotel waited an hour to call police after the IMF chief left, apparently in a hurry.

He has been charged with attempted rape, sexual abuse, a criminal sexual act, unlawful imprisonment and forcible touching. If convicted, he could face 25 years in prison.

The woman he is accused of assaulting is an asylum seeker from Guinea with a 15-year-old daughter.

In the only public hint of Strauss-Kahn's possible line of defense, his attorney Benjamin Brafman told his arraignment hearing on Monday that the evidence "will not be consistent with a forcible encounter".

Any trial could be six months or more away.