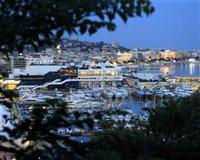 For more than 60 years this French Riviera city has hosted the Cannes film festival and the movie market that takes place with it.

The city, which has a history dating to the second century B.C., plays host to a variety of conventions throughout the year and is a major tourist stop on France's Cote d'Azur.

It is a refreshing, if expensive, weekend getaway and a great spot to begin an auto tour of France's Provence region.

Reuters correspondents with local knowledge help visitors to Cannes get the most out of a short stay.

6 p.m. There are numerous hotels of all types, ranging from the high-end Carlton and Majestic to smaller hotels including a bed and breakfast near the east end of the famed Cannes Croisette, called the Alexandre III. The rooms are moderately priced and away from the madding crowds of downtown Cannes, so there is a chance to relax. (hotel-alexandre3.com)

8:30 p.m. After unpacking, stroll up the Croisette, enjoy the breeze, the swaying palm trees and people watching. The lights of the hotels lining la plage (beach) brighten the night and music pumps from the discos. At the Martinez, head into the city a half block and enjoy a light dinner and a half bottle of wine at Lebanese restaurant, Noun.

11 a.m. After sleeping in and enjoying a breakfast of coffee, juice and croissant, head into the city for some shopping on the Rue d'Antibes. Here you will find anything from high-end fashion by the likes of Gucci to art galleries, home furnishings and everyday items.

2 p.m. Time for a light lunch along la plage. There are numerous restaurants that line the beach, and the menus are about the same -- a sampling of local fish such as sea bream or mussels. Stop for fresh salad, seafood and rose wine at L'Ondine.

3:30 p.m. For modest prices that vary depending on service, many restaurants rent lounge chairs for the beach and provide food and beverages, as well as changing rooms. There are public beaches, too. Pack swimwear, change and then spend the rest of afternoon soaking up the sun, before heading back to the hotel.

9:00 p.m. A brief nap at the hotel will ease you into the evening and back onto the Croisette. There are numerous restaurants to chose from -- no reservations needed. Try Fleur de Sol, a small Italian restaurant with a friendly staff where you can dine on salad, filet mignon and a bottle of Italian wine.

Alternatively, wander up the steep, winding, cobbled street that runs through Le Suquet old quarter, which is lined either side by a rich choice of eateries. If your budget permits, step into the upmarket Le Mesclun and savor roasted duck breast with spicy honey accompanied by a fine claret. A mid-market option at the bottom of the hill is the friendly Chez Vincent et Nicolas, whose grilled sea bass is a good match for a light, fruity white wine.

10 a.m. Get up and take an excursion to the small Ile Sainte-Marguerite, which is situated in the city's bay. Although there are small cafes on the island, you can pack a lunch and have a picnic.

10:45 a.m. After about a 45-minute walk up the Croisette and around the harbor filled with yachts, you reach the ferry for the 15-minute trip to Sainte-Marguerite, passing boats bobbing in the sea looking back at the Cannes skyline.

11:00 a.m. After arriving, walk for a short time along pathways lined by local foliage and opening into glades of fresh flowers and green trees. Spend some time in the historic Fort Royal, which in past centuries protected the city's harbor.

1:00 p.m. Walk the entire island, and in a roundabout way arrive on its south shore and stop at a private cove. Spread out a blanket and look out at the many boats in the harbor between Isle Saint-Marguerite and Ile Saint-Honorat further south, which has a monastery that dates back to around 400 AD.

After a picnic lunch of fresh fruit, cheese, meat and of course in the south of France, a bottle of rose wine, spend the rest of the afternoon relaxing, reading and enjoying the day.

5:30 p.m. Time to go. Upon your return, stroll back along the harbor and stop for an early supper at La Pizza, at the corner of Boulevard Jean Hibert and Quai Saint-Pierre. It is hard to miss as the restaurant is practically an institution in Cannes and gets crowded at night. Order a pizza and then head back to the hotel Alexandre III for an early evening in.