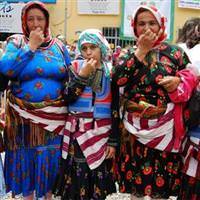 Every year a Bird Language festival is held in Giresun's Çanakçı district to celebrate the regional whistling dialect. This year’s festival will be held May 29th.

The residents of the district's Kuşköy village have been using a form of whistling to communicate with one another for hundreds of years now; they call it the 'Bird Language'.
According to Şeref Köçek from the Bird Language Promotion Culture and Tourism Association (Kuş Dilini Tanıtma Kültür ve Turizm Derneği), "Every year we host a Bird Language, Culture and Arts Festival in order to promote our regional folklore values. Aimed to introduce the whistling language as a cultural legacy as well as to promote this unique way of communication in order to pass it down to younger generations, this year on May 29th, we will be hosting the 14th Bird Language Culture and Art Festival." Noting that the Festivities will be broadcasted live by a private television station, Şeref Köçek goes on to state, "Both national and local press will be attending the festival as will a number of vocal artists. In addition, the festival will also showcase a bird language show and competition."