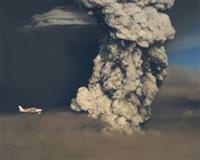 Two German airports halted flights on Wednesday as ash from an Icelandic volcano drifted across northern Europe, with parts of Scandinavia also facing a risk of disruption.

The Grimsvotn volcano forced the cancellation of some 500 European flights on Tuesday, with Scotland especially hard hit.

Eurocontrol, the Brussels-based agency responsible for some of the world's busiest air corridors, said the ash cloud may affect parts of Denmark, southern Norway and southwest Sweden on Wednesday.

"Currently there is no forecast when the restriction will be lifted," Hamburg airport said on its website. German airline Lufthansa advised passengers that tickets for canceled flights within Germany could be exchanged for rail vouchers.

The ash has caused far fewer problems than last year, when more than 10 million people were hit by a six-day European airspace shutdown after another Icelandic volcano erupted. Airlines put their revenue loss then at $1.7 billion.

But the latest episode has exposed disarray among the people who decide on aviation safety as they try to apply new rules to avoid another mass shutdown. Budget airline Ryanair was again vocal in its criticism on Tuesday, and airline association IATA said more coordination was needed.

Dutch airline KLM said it would cancel 19 flights on Wednesday to and from Britain, Norway, Sweden and Germany. It expected to operate all other flights as scheduled.

In Iceland, volcano experts had good news for airlines as they said the eruption was petering out.

President Olafur Grimsson told the BBC: "The volcano seems to be calming down. The eruption is gradually being diminished and the ash cloud is definitely smaller than it has been."

Traffic in Scotland and northern England was the main ash victim on Monday, but Britain said it thought this would ease. UK air traffic control body NATS said no ash was expected over Britain from 1 a.m. (8 p.m. EDT) on Wednesday.

Among travelers affected were U.S. President Barack Obama, who left Ireland for Britain late on Monday ahead of schedule.

Eurocontrol said the approximately 500 flights canceled on Tuesday were out of around 29,000 expected that day across the continent.

New procedures put the onus on airlines to make judgments on whether it is safe to fly through ash, in coordination with the forecasting authorities and civil aviation bodies.

Showing the problems, sources told Reuters that a British research plane designed to sample ash remained grounded for a second day in a wrangle over its deployment.

The rules are also not accepted by all, with Germany backing a tougher stance for the sake of safety, aviation sources said.

"The potential for a patchwork of inconsistent state decisions on airspace management still exists," IATA Director General Giovanni Bisignani said in a statement.

Ryanair said it had safely sent two planes into what authorities had deemed high ash zones over Scotland, and criticized "bureaucratic incompetence."

Grimsvotn erupted on Saturday and smoke belched as high as 20 km (12 miles) into the sky. The eruption is its most powerful since 1873 and stronger than the volcano that caused trouble last year.