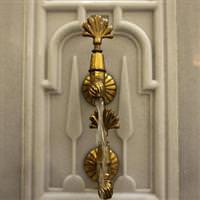 For decades the 16th century bathhouse built for the Ottoman Empire's most infamous woman, Roxelana, languished unnoticed between the Blue Mosque and the Haghia Sophia, relegated to life as a carpet showroom.

Ottoman bathhouses, structures once so important they were designed by the finest architects of the realm, fell out of favour as Turkey modernised and its citizens installed running water and bathrooms in their homes.

Yet the architectural pedigree of many of the bathhouses, the rising number of foreign tourists, and a resurgent interest among Turks in all things Ottoman, have revived the fortunes of the old stone hamams as developers recognise their huge earning potential.

Roxelana's hamam, a long, domed building completed in 1557 by the prolific architect Sinan, is the latest Istanbul bath to be restored to its former grandeur -- emerging after years of neglect as an oasis of gleaming marble and inviting alcoves.

"Turkey is learning to place more importance on its past," said architect Tevfik Ilter, who led the 17 million lira project.

"In the last 15 years we started to restore our buildings. Before that the focus was on constructing things fast. If a structure was broken we'd just try and fix it with concrete."

In 2007 Istanbul authorities decided to return the hamam to its original use after a 105-year hiatus and launched a tender for its restoration, won by a tourism development group.

The bath will open in June and charge 86 euros for the customary steam bath, peeling and soap massage. The same service in one of the handful of old local hamams still in operation in Istanbul would cost around 15 euros.

Visitors to the separate men's and women's sections of the bath enter a soaring domed chamber the size of a small mosque, with tiers of wooden changing rooms circling the walls.

After donning a cotton wrap known as a pestemal and slippers they enter the steamy, white marble bath. Once the moisture has penetrated their skin, an attendant scrubs the body to remove the dead skin cells, before dousing the visitor in water.

"It is not just about bathing. It is a purification process, a ritual process," Ilter said.

Hamams are a tradition common to most Muslim countries as Islam emphasises cleanliness and washing, particularly before prayer. But besides their original religious function they were also a place for people to relax and mingle.

While Istanbul now offers four or five historic luxury hamams to chose from, the figure of Roxelana, long a subject of Western orientalist fantasy could prove a paticular draw.

Born into a Ukrainian family as Aleksandra Lisowska some time around 1500 she was captured by raiding Crimean Tartars and sold as a slave in Constantinople, where she was selected for the harem.

Through her charm and guile she managed to catch the eye of Sultan Suleyman the Magnificent, displacing his former favourite and eventually becoming his wife.

The bath's reopening coincides with the screening of a television drama based on the life of Roxelana, which has captivated Turkish audiences, but also drew complaints for its sexual content and liberty with the truth.

Its glamorous costumes, sumptuous interiors, and the endless conniving and plotting among the women of the harem have fed the resurgent local interest in the Ottoman Empire, from which modern Turkey was formed in 1923.

History has not viewed Roxelana kindly, portraying her as a meddlesome schemer. Her son Selim, inherited the empire from his father but proved a disastrous ruler and an alcoholic.

Selim is said to have died in 1574 after slipping and banging his head in a hammam while drunk.

"We don't know for sure whether Roxelana ever came to her hamam. She died in 1558 and the bath was finished in 1557," said Ilter.

"Some people think the Sultan built it for her so bathers would pray for her in her ill health. Either way the location of the hamam, right opposite the Haghia Sophia in a central position shows her power and influence."

Old Istanbul is littered with the ruins of old hamams, most of which are beyond saving. But other restorations are already in the works, particularly of structures built by Sinan.

"History used to be about war and about being a hero. Now we are learning about the history of architecture, leisure and social life," Ilter said.