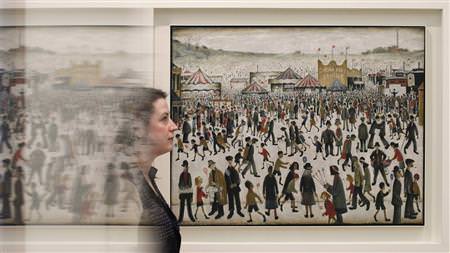 Lowry's lonely people, Tracey Emin's scrawlings and a mysterious portrait of Elizabeth I are just a few of the gems from the British government's art collection unveiled to the public for the first time this week.

The exhibition, at London's Whitechapel Gallery and picked by top government officials old and new from offices scattered across the globe, brings together a mix from five centuries of art and diplomacy.

The painting, which usually hangs in Cameron's Downing Street headquarters, fetched a record price of 3.8 million pounds ($6.2 million) at auction in 2007.

Emin's 'Still Love You Margate' and 'Margate 1 Sand' will also catch the eye -- stark and blurry odes to an unspectacular English seaside resort town. In one, a lone child-like seagull hovers, in the other, a couple copulate on the beach.

"I spent every summer with my aunty and uncle in Margate as a child, so there is a strong personal connection for me in the pieces," said culture minister Ed Vaizey, who chose both pieces.

The three-month exhibition, the first of five from the 13,500-piece collection to feature at the gallery until September 2012, also sheds some light on the thinking of Britain's top diplomats and spies.

Gallery curator Daniel Herrmann said he was fascinated to discover the way the large collection "navigated the waters of history but also the waters of diplomacy."

Rock and roll singer Buddy Holly, former U.S. President Abraham Lincoln and Lord Horatio Nelson poke out from the clouds in a painting which must have turned a few heads in Moscow.

"The Doors took their name from Aldous Huxley's book The Doors of Perception, the title of which was a reference to a William Blake quotation: 'When the doors of perception are cleansed, things will appear to Man as they truly are ... infinite," Sawers said, describing his choice.

There is also a glimpse back into life from another era. Two full-size 17th century portraits of The Winter King and Queen of Bohemia dominate one wall at the show, the first time the works have left the British embassy in Prague.

An anonymous portrait of Elizabeth I, who reigned from 1558 until 1603, chosen by former Labour minister Peter Mandelson, is one of two nods to Britain's royals.

The other, one of the quirkier contributions to the show, is a David Dawson photograph of veteran artist Lucian Freud painting Queen Elizabeth II in a humble, plain room in 2001 -- a black handbag clearly visible by the side of her golden chair.

Artist Cornelia Parker and historian Simon Schama have been lined up to select forthcoming exhibitions from the collection.