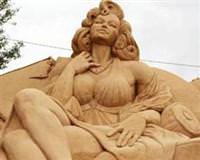 Yesterday marked the opening of the fifth International Sand Festival in Antalya.

Knows as the world's second largest sand festivities, this year's 'Hollywood' theme had 25 sand sculptors arrive to Turkey from 13 different countries. Ten million tons of sand were used for the giants structures that are representations Hollywood's record breaking films and heroes including such well-known characters as Marilyn Monroe, Charlie Chaplin, Spiderman and characters from the Lord of the Rings. The festival runs until November 14th
Explain that the sculptures were made within two months time, Festival Director Cem Karaca states, "we are expecting 200,000 visitors to attend this year's festival. Last year, there were 160,000 visitors, 75 percent of which were foreigners." The opening was attended by Brigade and Garrison Commander General Kemal Korkmaz and Muratpaşa District Governor Fatih Kocabaş.