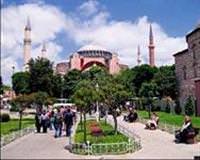 Istanbul, which has been designated by global research firms to be amongst the cities anticipated to experience an explosion in tourism revenue, has already seen a storm of tourists since the start of the year.