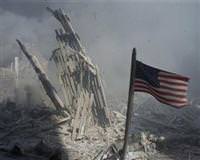 When a hijacked aircraft smashed into the north tower of the World Trade Center on September 11, 2001, Lisa Lefler left behind her briefcase as she fled to safety from her office on the 103rd floor.

Fifty-six minutes later, 175 of Lefler's colleagues, as well as that briefcase, were entombed in the wreckage.

Lefler's briefcase, along with more than 50 objects collected after the attacks that claimed 3,000 lives, will be displayed September 3 to 11 at the Smithsonian's National Museum of American History, museum officials announced on Thursday.

"Ten years later, we will share some of those objects in a personal setting, providing an opportunity for visitors to speak with museum staff and to have a place to remember and reflect on what it means to be an American today," Brent D. Glass, the director of the museum, said in a statement.

Visitors to the collection, amassed by the museum in 2002 after Congress designated it the official repository, will see airplane fragments, a wall map from the Pentagon, a mangled fire truck door, as well as photographs and documents.

The objects were collected from the three attack crash sites -- the Pentagon, the World Trade Center and a field in western Pennsylvania. They will be preserved permanently at the museum so future generations can "comprehend the horrific events, their roots and their long-term consequences," according to information from the museum.