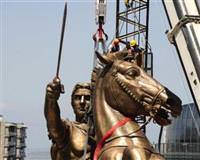 Macedonia erected on Tuesday a giant bronze statue of Alexander the Great, further inflaming a long-running row with neighboring Greece that is blocking the country's bid for membership of the cand NATO.

Cranes hoisted the 40-tonne, 11-meter-high (39-feet) statue on a 10-meter-high pedestal in downtown Skopje, where hundreds of people cheered and took pictures.

"He is back. Alexander is finally home and can now rest," said Goran who brought his children to witness what he described as an historic event.

Greece has prevented Macedonia's entry into NATO in 2008 and blocked its progress toward EU membership because it rejects the name Macedonia, which it says implies territorial ambitions toward Greece's own northern province of Macedonia, birthplace of Alexander the Great.

The statue was carved in Italy and cost Macedonia nine million euros ($13 million).

Western diplomats had voiced worries that erecting the statue will further complicate the 20-year negotiation process between the two countries that has so far failed to reach a compromise on the name dispute.

"It certainly won't help. We have urged authorities in Skopje to refrain from acts that Athens sees as a provocation. With the statue any hopes of a quick solution of the name dispute are gone," a Skopje-based western diplomat told Reuters.

Alexander the Great's equestrian statue is the center piece of a controversial project by the Macedonian government called Skopje 2014, aimed at upgrading the battered capital.

It stands beside a Triumphal Arch, near a museum of waxworks of past Macedonian leaders, a palm beach and a future ferris wheel in the heart of the city.

Prime Minister Nikola Gruevski says the Skopje 2014 project will create a capital worthy of the name and reflect Macedonia's ancient glory, but opponents say it is a distraction that wastes needed resources in one of Europe's poorest countries.

Plans include 15 grand new buildings by 2014 including a new Foreign Ministry and constitutional court.

The final cost of the Skopje 2014 is unclear. The government put a price tag of 80 million euros ($115 million) on the project when it unveiled it in 2009, while the opposition says it has already swallowed around 200 million euros.

Economic reform is vital as one third of Macedonia's people live below the poverty line with a jobless rate of over 30 percent. The economy, projected by the International Monetary Fund to expand by three percent this year, grew only one percent in 2010.