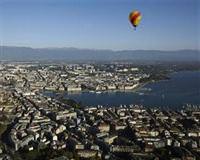 A setting on western Europe's largest lake with Mont Blanc, western Europe's highest peak, as a backdrop, explains why Geneva has a wealth of healthy looking citizens who arrived for months and have stayed for years.

If you only have a weekend, here are some tips from Reuters correspondents with local knowledge to help you on your way.

Take the train (just over three hours from Paris) or the airport has fast connections to the city.

It's also very close to the U.N. European headquarters, central to Geneva's status as an international city, where you could begin your tour, but drop off your bags first as they might be a security problem.

Morning tours start at 10:30 a.m. and you can book them on the U.N. European website.

Visitors, armed with their passports, must enter at the Pregny gate, just up the hill from the Place des Nations, where campaigners for a vast array of causes gather between the fountain, the flags and a giant chair with part of one leg blown off.

The sculpture's aim is to support the prohibition and elimination of anti-personnel mines.

A U.N. tour will include the council chamber -- setting for debates drawn out over hours, months, even years -- and a history of how the United Nations evolved from the League of Nations, set up in 1919.

The pioneers decided the body needed a home to suit the league's yearning for a more stable world after the devastation of World War I and they held an international competition.

As a precursor of many U.N. outcomes, the judges could not decide on one winner -- so a team of five architects from four nations was chosen.

The Palais de Nations is the harmonious result, built between 1929 and 1938.

Since then, there have been two extensions, creating a huge complex set in 45 hectares of parkland with a view over Lake Geneva to the French Alps.

Adding to its charms, peacock cries echo through the grounds, a legacy of the art collector and keen traveler Gustave Revilliod who left the land to the city on condition peacocks would always roam there.

Before you leave the U.N., you could send a postcard home with a special U.N. stamp from the U.N. post office.

12:30 p.m. Trams from Place des Nations will take you down to the main station Cornavin.

From there, it's a short walk across to the left bank and lunch in one of the cafes or restaurants of the quaint old town.

2:30 p.m. The old town is the home to the Cathedrale Saint Pierre (St Peter's Cathedral), which dates back to the 12th century.

In the 16th-century, the religious reformer John Calvin fled his native France and made Geneva his home.

He delivered many of his sermons in the originally Roman Catholic cathedral, which became protestant and was stripped of its altars and paintings, leaving only its stained glass windows for decoration.

Amongst other things, visitors can inspect a plain, uncomfortable-looking chair, said to have belonged to Calvin.

They can also climb up the North tower for a panoramic view over Geneva.

To go deeper into Geneva's austere side, look no further than the International Museum of Reformation in the Maison Mallet, built in the 18th-century on the site of the cathedral cloisters.

Alternatively, you might find yourself drawn toward the nine gilded cupolas of the nearby Russian orthodox church.

With a dark, mysterious interior, packed with treasures, it is the diametric opposite of Calvinism.

4:30 p.m. An unintended consequence of the reformation was Geneva's watch-making tradition.

After Geneva officially adopted the Reformation in 1536, the authorities issued anti-luxury rules or "ordonnances somptuaires," obliging the gold and silver smiths to find a new source of income.

While Calvin forbade jewelry, he acknowledged watches were useful and therefore acceptable.

Adding further momentum to the shift, Geneva's status as a Protestant bastion meant Huguenot refugees, escaping persecution in France, brought their watch-making skills with them.

The Patek Philippe Museum in the company's former workshops in Rue des Vieux Grenadiers gives insight into the intricacy of watch-making and the related skill of enamelling.

It includes examples from every era and type of time-keeping as well as from its own brand.

Meticulously-crafted mechanical birds sing on the hour, while black mourning watches and a memento mori skull watch remind us how swiftly time passes.

6:30 p.m. By now your spirits might need lifting, so return to the lake shore and stare out at the Geneva Jet, situated around the point where the River Rhone meets Lake Geneva.

Originally a safety valve for a hydraulic power network, the 140-meter-high jet of water has become a symbol of Geneva captured on millions of tourist photographs and post-cards.

Along the lake shore and the streets off it, you can choose between supremely elegant and expensive hotels, old-style cafes and new-style wine bars, such Chez Lucien in rue de la Scie.

8:30 p.m. For dinner, you might want to try perch, fished from the lake and served in lake-side restaurants.

Alternatively, after all the beauty and elegance, you could feel in need of the hearty, Italian food provided by the pizzerias, again just off the lake-side in left-bank Geneva.

After a packed Saturday, how about a sedate Sunday, drifting on the lake or mooching about in the villages beside it?

10 a.m. Cruises are on offer, including on paddle steamers, from the Quai du Mont Blanc or the Jardin Anglais (English Garden), where the famous floral clock blooms as it ticks.

A popular option is the cruise that takes you to the pristine Swiss town of Nyon, surrounded by vineyards, and the medieval town of Yvoire, just over the border in France.

Once a strategic military route, with a fabulous chateau to prove it, Yvoire is regarded as one of the most beautiful villages in France -- the downside of which is that it has more tourists than its medieval streets can accommodate.

A more energetic alternative to cruising both ways is to cycle along the lake to Yvoire and then take a boat back.

Geneve Roule has shops dotted around Geneva from which you can rent a bicycle or even just borrow one for up to four hours.

Cycling to Yvoire is an option that will take you most of the day, including a stop for lunch.

2 p.m. Taking the boat there and back should give you time to take in more of Geneva's elegant lifestyle.

In the summer, you could spend a lazy few hours at Bains des Paquis, off Quai du Mont Blanc. One of the cheapest options in a seriously pricey city, entry to the Bains -- effectively a cordoned off part of the lake with a shingly beach -- is a mere 2 Swiss francs ($2.34).

A sauna, tempting after a dip in a chilly lake, is extra.

You can also buy food and drinks at the Bains des Paquis restaurant.

6 p.m. Time to head for the airport or train station unless you've decided to take an early flight/train the next day.

If you've opted for the longest weekend you can get away with, take an early evening drink/snack from Bains des Paquis or from one of the stands that spring up beside the lake during the summer months.

And then it's time to round off your trip with some serious Swiss expenditure.

During the auction season, you can drop in on one of the evening sales Sotheby's and Christie's hold at luxury hotels lining the lake. (Calendars are on the company websites).

One of the most famous collections to go under the hammer in Geneva was the Duchess of Windsor's jewelry, which fetched a record of more than $50 million in 1987.

More recently, a spectacular diamond and emerald tiara sold for $12.76 million. In keeping with Geneva's tradition of wealth and stealth, the buyer was anonymous.