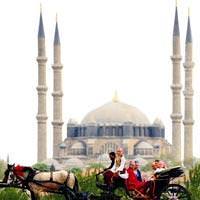 UNESCO has added Selimiye Mosque and Complex to its World Heritage List.

Edirne is thrilled that their famous Selimiye Mosque has officially made UNESCO's Word Heritage List and now plans to redesign the surrounding area, including adding outdoor seating, handicap access as well as designating areas for photography. The mosque's adjacent square, which was previously used as a location for political party rallies, will now become a town square.

UNESCO updates their World Heritage List each year and requests reports from all of the cultural sites. If the reports are not convincing, then an expert is sent out to the site.
The Selimiye project will be inspected in 2012. Considered to be the architect of UNESCO's projects, Yaşagül Ekinci states, "We even had to calculate how much pollen is distributed from the trees surrounding Selimiye. If an elder woman, or a mother with a child, were to come, we had to determine where they would sit. If a tourist wants to photograph the mosque, we had to establish which would be the best angle. We thought of all of these items one by one. When Selimiye Mosque became a candidate, the number of tourists that visited increased. Now that the official decision has been made, that number will increase even further. We think the number of tourists may even double."

Municipality Assembly member Namık Kemal Döleneken, who attended the meetings in Paris as a representative of the Edirne Municipality states, "There were a total of 42 files and while the others were debated for hours, Selimiye was selected without any debate and unanimous votes."

CELEBRATING WITH A TON OF LIVER
Bahri Dinar, the Chairman of the Edirne Promotion and Liver Protection Association, has announced that they will be distributing one ton of liver for free over the next few days in celebration.