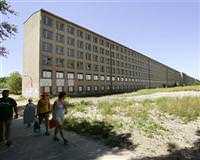 A gigantic Nazi seaside resort on Germany's Baltic coast in the town of Prora has been turned -- after decades of disuse and decay -- into one of the country's largest youth hostels.

Yet initial advertisements highlighting its Nazi past as the "World famous" Strength through Joy (Kraft durch Freude) project caused objections from local historians and led to a marketing U-turn, but not before the German media took notice.

Originally built as the world's biggest hotel, stretching along 4.5 km (3 miles) of one of Germany's best beaches with 10,000 rooms, it was never used as a holiday resort for the masses in World War Two or afterwards although it was used by the military.

As part of the Nazi's Strength through Joy programme, the resort's aim was to prepare up to 20,000 citizens for war through organized leisure.

The outbreak of World War Two put an abrupt end to its construction in 1939, yet even in its incomplete version it was one of the biggest Nazi building projects.

The opening of one of the site's parts as a youth hostel on Monday has also led extreme right-wing forums on the web to express their enthusiasm over the event, which attracted widespread media attention in Germany.

"The usage of the term 'world famous' in the advertisement is problematic," said Perke Kuehnel of the Documentation Center Prora, which chronicles the Nazi history of the site. She added that using the term showed a lack of historical sensitivity.

"Everyone involved is aware that the project needs to be handled in a sensible manner," Jochen Schmidt of the state agency for civic education told Reuters, adding that the particular sentence was more a question of detail.

Having just returned from a meeting with the hostel's management, Schmidt pointed out that the youth hostel was already taking measures. "Colossos of Ruegen" was now exclusively used in the marketing of the site.

In collaboration with local Prora Center, the hostel is currently also in the process of setting up a center documenting the site's Nazi, Soviet and East German past for the public and hostel guests in particular, which is to be open from 2013.

In the meantime the existing choice of tours and exhibitions on offer ensures that all guests have the opportunity to combine leisure with a journey through history.

The idea of a mass tourist resort and the design's steel-reinforced concrete architecture won it an award at the 1937 Paris world exhibition. The original building plans foresaw a structure of eight housing blocs.

World War Two put an end to the Nazi vision however, and building stopped in 1939. The resort was never finished. Today, five building blocs remain usable thanks to the robust design, which have withstood strong sea winds and decades of neglect.

In 1944 and 1945 the building housed refugees fleeing from the advancing Soviet Red Army. After the war the Soviets took over, followed by the East German military.

Despite its historical legacy, it is also a site of resistance, as Schmidt points out. Those who rejected conscription to the army in East Germany were sent to Prora to become "Bausoldaten" -- or "construction soldiers."