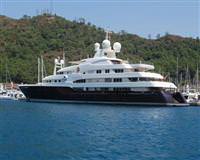 The 82-meter long 'Sarafsa', which is owned by Jordanian King Abdullah and is considered to be one of the largest 100 yachts in the world, arrived to Marmaris yesterday. Entering the Marmaris Gulf in the early morning hours yesterday, the Sarafsa first anchored in the open sea, then after conducting the necessary preparations later moored at the Netsel Marina.
A number of nearby yacht owners claim that king Abdullah and his wife Queen Rania are aboard and witnesses state, 'Once the yacht moored at the marina, there was an immense amount of activity. First they were delivered fresh-squeezed orange juice which was delivered after passing through the security detail."
In 2010, the Sarafsa was named 55th in a list of the world's largest 100 yachts. The four-level yacht operates with 20 personnel. The yacht is fitted with a heating system situated under the marble flooring, and all of the faucets are gold-plated. In June of last year, the Sarafsa arrived to Marmaris for a day and then continued on a 'blue voyage'.