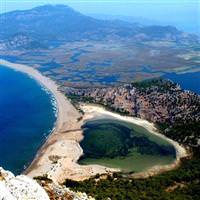 The Iztuzu Beach, located in Dalyan has been named Europe’s number one beach in a survey conducted by Dutch holiday review website Zoover and weather prediction company Meteovista.

In a written announced released by the firm it was noted that Portugal's Monte Gardo Beach came in second and the Stalis Beach in Greece was selected third.

Three beaches in Turkey also made the top three spots in the same survey's findings for 'Most Popular Beaches'. The beaches selected are located in Side, Alanya and Marmaris.
Meanwhile, the list compiled by the Zoover internet website, which names the 'Top Ten Beaches in Europe' includes four beaches from Greece, three from Turkey, two beach from Portugal and finally one from Spain.
Known for its resplendent rock tombs and famous for the visiting Caretta Caretta sea turtles which visit the beautiful beach to lay their eggs, Dalyan has been selected as 'Europe's Best Beach Destination'.
The website describes the town of Dalyan, which is located in the Ortaca district of the Southwestern province of Muğla, and is situated along the Lycia coast in a protected zone. Therefore, no permission is granted for the building of high buildings. Describing the Dalyan beach as having average temperatures at 29 degrees Celsius and claiming that it rarely rains, the Dalyan beach received 8.9 points on the Zoover.nl website.