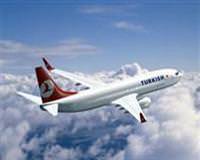 After initiating flights to Rome, Milan, Venice, Bologna, Geneva and Naples, Turkish Airlines will soon be adding Torino to their flight destinations as of August 2nd, 2011.

Return flights departing prior to August 31st, 2011 start off at 200 Euros, including taxes.
Meanwhile, Turkish Airlines will also begin flying from Istanbul to Dammam, Saudi Arabia as of September 12th, 2011, with flights scheduled for three days a week.
In addition, Turkish Airlines also began flying to Islamabad Pakistan on July 21st, 2011 with continued flights departing on Tuesday, Thursday and Sunday.
With a total of 186 flight destinations at present, 41 of which are domestic locations and 145 which are international, by adding the newly scheduled flights to Torino, Turkish Airlines has brought their number of destinations up to 187 cities.