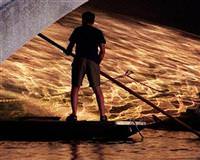 Got 48 hours to explore the colleges, pubs, green spaces and leafy towpaths of Cambridge, England? Reuters correspondents with local knowledge help visitors get the most out of a visit to the city that is home to one of world's oldest universities.

6 p.m. Arrive at Cambridge train station and breathe in the soft air of the Fenlands. Cambridge is a town of cyclists, where everyone from students to software millionaires ride bicycles to get around.

If you want to get the most out of the city, you can rent one too right outside the station at Station Cycles (www.stationcycles.co.uk). Buy a map while you're at it.

7 p.m. If you're staying in the center of town and you like a bit of history, stop in at The Eagle. It is one of the oldest pubs in Cambridge, dating back to the 1600s with a galleried courtyard for outdoor drinkers. A plaque outside will tell you this is the pub where Cambridge scientists Watson and Crick cracked the secret of DNA and there will likely be plenty of modern-day geniuses knocking back their Friday night pints. The ceiling in the RAF room at the back is festooned with the smoky signatures of World War Two airmen stationed around Cambridge, who wrote their names in soot on the ceiling before flying off to confront the Luftwaffe.

11 p.m. Most pubs in Cambridge still close near or around this traditional closing time, though some stay open past midnight. You could try the nightlife if you're keen. There are at least three busy late night clubs close by The Eagle: The Kambar, Lola Lo and Fez Club. But beware it's an early start in the morning...

8 a.m. Rowing is a Cambridge passion, though the Cambridge University Boat Club (www.cubc.org.uk) lost the 157th "Boat Race" against Oxford this year. Nevertheless, students, lecturers, top athletes and keen amateurs all turn out in the early morning for a row. If you're in Cambridge in early June you can see the Cambridge University "May Bumps" races for the student "gownies" or in late July the Town Bumps for "townies." Both sets of races are a big spectacle and bring thousands of people to the river for four days of rowing mayhem, dinners, picnics, parties, BBQs and bonfires. The races are conducted in boats with crews of eight who chase each other down the river intent on overtaking to "bump" the crew ahead. Crashes, sinkings and even rowers knocked out of boats are regular occurrences. Bankside, cyclists race along the towpaths screaming support for their teams, so watch out! Cycle out across Midsummer Common to the towpath to see the rowing or just look at the lovely college boathouses perched on the banks, with their escutcheons proudly displayed. Foremost of these is Goldie Boathouse (1880), where the Cambridge University team conduct their indoor training. If you're lucky, the doors will be open and a number of scantily clad top athletes will be getting put through their paces.

12 p.m. Hit the pub. The riverside pubs in Cambridge are gorgeous on a fair day and filled with rowers. Most have outdoor seating and serve food. One of the oldest is the Fort St. George, right on the banks of the Cam. Just up the road is the Old Spring. Further along the river heading out of town toward Ely are the Green Dragon and about an hour's cycle is The Bridge at Waterbeach.

2 p.m. If you've gone to the Bridge at Waterbeach then you'll have to cycle back into town. After a big lunch and a few pints it might take longer than expected. Don't rush, the river outside of town is surrounded by picturesque countryside and home to herons, ducks, swans and kingfishers. Sheep and horses can sometimes be seen grazing in fields by the bank.

3 p.m. Don't abandon the river just yet. After all the excitement of the rowing and hours in the saddle, it's time for you to get on the Cam yourself for a glorious introduction to the gardens and architecture in Cambridge. The river wends its way through the middle of town and around the back of some of the university's oldest colleges. The best way to drink it in is from a traditional punt on the river. There are any number of hire companies, but one of the biggest is Scudamore's (www.scudamores.com). Feel free to attempt punting -- propelling the traditional flat-bottomed wooden boat using a wooden pole -- yourself. But beware that it's a hilarious past-time for locals to snigger at the hapless tourists who end up spluttering in the river when their pole becomes stuck and their punt slides out from under them. A more relaxing way to see the college "Backs" is to hire a chauffeur, often a student, who will propel you along regaling you with the history of the colleges while you laze in the punt eating strawberries and cream, drinking Pimm's and enjoying the blooming gardens and the serene beauty all around you.

6 p.m. Drop into the Granta pub overlooking the Mill Pond or The Mill for a swift pint or two after your punting and before you get changed for dinner.

8 p.m. There are a number of good restaurants for fine dining in Cambridge and of course, plenty of pubs. For the pub option take your pick of the pubs reviewed by Cambridge Pubs, with a map and descriptions at www.cambridge-pubs.co.uk. Cambridge has a number of good fine dining options. Here are three. Midsummer House Restaurant (www.midsummerhouse.co.uk) has two Michelin stars and is located right on the river on Midsummer Common next to the Fort St. George pub. It is set in a converted Victorian house serving French Mediterranean food. Cotto restaurant (www.cottocambridge.co.uk) hasn't the Michelin stars but boasts that it uses only the freshest ingredients sourced locally. Hotel Du Vin (www.hotelduvin.com/HotelLanding.aspx?HotelId=7), in the center of town has an 80-seat bistro serving European cuisine.

11 p.m. Go home to bed or brave the raucous Saturday night clubs in town. There will be plenty of walking tomorrow to get round the colleges.

10 a.m. Now that you've had what the British refer to as "a lie-in" you should feel ready to tackle Cambridge on foot in order to have a close-up look at an academic institution whose life began in 1209 and whose alumni range from Isaac Newton, Charles Darwin and William Wordsworth to Stephen Hawking, actor Hugh Laurie and Sacha Baron Cohen, the man behind Borat. You'll never get through all the colleges as there are many and some will be closed to visitors. But a good place to start is at the bottom of St. John's Street next to the 12th century Round Church, founded by the Fraternity of the Holy Sepulchre. Have a peep inside at the Romanesque architecture. Wander up St. John street from here, taking in the colleges. Two of the biggest and most interesting to wander around are Trinity and King's. Pop into Trinity (www.trin.cam.ac.uk) through the Great Gate. On the outside of the college, is a statue of its founder, Henry VIII. Some years ago the statue's scepter was replaced by a chair leg as an undergraduate prank. Ask the tourist porter at the gate if you can have a wander round. Visitors must pay a small entrance fee, but then have the opportunity to see the college chapel, Great Court, Hall, Nevile's Court and the magnificent Wren library completed in 1695 to the design of Christopher Wren. The library contains a number of special collections including medieval manuscripts; early Shakespeare editions; books from Newton's own library and A.A. Milne's manuscripts of Winnie-the-Pooh. Wander the courtyards and buildings that have inspired 32 Nobel prizewinners as well as Francis Bacon, Lord Byron, and Alfred Tennyson.

12 p.m. Press on along the same street, although it's now called Trinity Street, past the grand Senate House, where formal ceremonies are held. You should now be on King's Parade, a grand boulevard where stand the impressive buildings of King's College (founded in 1441). Call in at the Porter's lodge to gain entry to the beautiful court and grounds inside, where one of the most famous sights is King's College chapel. The foundation stone was laid in 1446 and it took over a century to build, including an interruption during the War of the Roses. The chapel houses the painting "The Adoration of the Magi" by Rubens. Every Christmas eve Carols at King's is broadcast around the world.

2 p.m. Trundle up King's Parade onto Trumpington Street and stop at Browns (www.browns-restaurants.co.uk/menu-cambridge.php) for hearty lunch fare or Loch Fyne (www.lochfyne.com/Restaurants/Locations/Cambridge.aspx) for seafood.

4 p.m. You can return to wandering around the colleges in the afternoon if you haven't had enough academic history. For a lazier afternoon option punt, take a taxi or cycle to Grantchester Meadows just out of town where students for generations have whiled away the hours reading, picnicking in an area made famous by World War One poet Rupert Brooke in his poem "The Old Vicarage, Grantchester." The Orchard Tea Garden -- where Brooke once lolled under the trees and ruminated -- serves morning coffee, light lunches, afternoon tea and champagne to guests who can rest their weary bones in wood and canvas chairs under the very same boughs. Though the Old Vicarage is now home to novelist Jeffrey Archer, you can still see the church clock stand at ten to three and there really is honey still for tea.