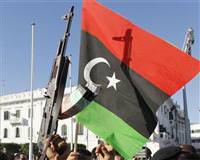 Free for the first time to make art about whatever he wants, veteran Libyan sculptor Ali al-Wakwak chose gnarled mortar shrapnel, bullet casings and shattered gun barrels as his medium.

"I saw the ammunition around, and so I thought I'd make something nice with it," the stout, bearded 63-year-old said as he sat sipping espresso outside a new art museum displaying his works near Benghazi's port.

As with many of the exhibits at the museum, housed in a monarchy-era palace, Wakwak's motifs revolve mostly around war, testament to the scars the six-month old uprising against Muammar Gaddafi has left on the North African country.

But the fact the new museum exists at all is a triumph for local artists, and many see it as evidence of the creative and open future they hope awaits their country despite its fractious politics, beleaguered public services and glut of heavy weapons.

"It was very difficult before," Sayed Mohamed, a 58-year-old painter, said. "Gaddafi hated anyone famous. He was the only one who could be famous. He was the leader, he was the guide - he was everything. You had to draw him and what he was doing. That was all you could draw."

Now, Mohamed said, he is free to depict and display whatever he wants. His exhibit included oil paintings of landscapes inspired by impressionists and post-impressionists including Cezanne, Monet and Van Gogh.

In the next room, a series of wood carvings portrayed traditional Libyan shoes, horse-drawn carriages and jars.

But most of the paintings in the palace once owned by King Idris, who was ousted by Gaddafi in a 1969 coup, tackle darker themes.

One shows Gaddafi's face looming over a row of tanks, rebel fighters on a machine-gun mounted pickup truck and a pile of skulls set against a red and black sky.

In one room, the walls are almost entirely covered by "identification cards of the martyrs," including names, birth dates, and the times and places where men were killed during the uprising.

One painting honors Ali Hassan al-Jaber, an Al Jazeera cameraman gunned down near Benghazi in March. Nearby, another work pays tribute to Kais al-Hilali, a slain political cartoonist whose caricatures adorn many of Benghazi's walls.

Many other artists have had scrapes with Gaddafi's government.

Wakwak spent seven years in prison after refusing to serve in a war with Chad in the early 1980s.

His brother was also imprisoned, as was his son, who returned on Sunday from Tripoli, where he had spent seven years in the Abu Salim prison.

Arrests were so frequent that almost everyone knew someone in prison, Wakwak said.

Visitors at the museum said they finally had a chance to enjoy a public space that wasn't controlled or monitored by Gaddafi's government.

"There wasn't a chance to go out and enjoy things, to see the art and know the artists," said Omar el-Ageily, 49, who brought his four- and five-year old daughters to the exhibition. "You just focused on the home."

Mohamed Hamed, 36, said of the exhibits he had seen he preferred Wakwak's sculptures, such as one figure crafted from rusting bullet casings and shrapnel holding up two 50mm fingers in a peace sign.

"I'm not an artist, I'm realistic. The most important thing for me is viewing the ammunition, the bombs," Hamed said. "Art expresses what an artist thinks, what he feels, but this is hard material. It's the truth."