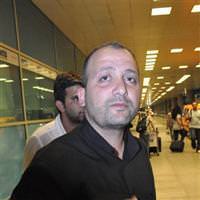 Turkish tourists said they were segregated and searched at Tel Aviv’s Ben Gurion Airport on Monday, accounts that further stoked a heated feud between the two countries.

Three days after Turkey expelled Israel's ambassador over Israel's refusal to apologize for a raid that killed nine Turks on a ship trying to break its blockade of Gaza in 2010, visitors from both countries were feeling unwelcome.
BODY SEARCHES
Turkish tourists arriving from Israel said they underwent body searches in Tel Aviv's Ben-Gurion airport before being given the go-ahead to leave the country.
Eyup Ansar Ugur, a Turkish guide who traveled with a group of Turkish tourists who went to Israel during the Ramadan Muslim holiday, said Turkish tourists were singled out and mistreated by Israeli officials. Both men and women were forced to undergo strip-searches in what was considered a humiliating display of affairs.
"There was a different treatment against Turkish people. Our luggage was rummaged by Israeli security officials many times. Since the search of our luggage took so long, our flight was delayed. They went through a napkin three times, and searched my trousers fifty times."
Another tourist, who was not identified in the report, said the Israelis treated the group "as if we were terrorists."
Asked about the report, a spokesman for Israel Airports Authority gave no details about the alleged incident, saying only: "Ben-Gurion security operates in accordance with security requirements and under the guidance of professional authorities."
Tourism between Israel and Turkey has declined as political tensions have risen.
In the first five months of 2011, only 30,000 Israeli tourists visited Turkey compared with 72,500 during the same period in 2010. The number of Turkish visitors to Israel fell slightly over the same periods, from around 6,900 to 6,600.