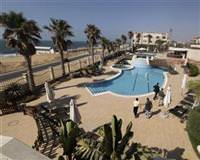 Amidst the poverty and deprivation of the Gaza Strip, a few small signs of prosperity have started to emerge, giving violence-weary locals a taste of comfort that is taken for granted in much the rest of the world.

A smart hotel which aspires to five-star service, a shopping outlet that boasts Gaza's first in-store escalator and a sparkling supermarket stocked to the rafters have all opened their doors this summer in the Palestinian enclave.

Their appearance does not mean that wealth and well-being are spreading in the tiny territory, because they are not. But they indicate a fresh willingness by outsiders to invest in Gaza and eye future potential.

"I have heard about this from my friends and today is my first visit. It is amazing," said Ali Mohammed, 45, a telephone technician who had come to buy chocolates at the central Al-Andalusia store, which is spread out over three floors.

"It is as if we were not in Gaza. The blockade is everywhere to be seen out there, but not in here."

Israel has imposed a strict blockade on Gaza in response to repeated rocket attacks from Islamist militants over the past six years. However, some of the restrictions have eased over the last 12 months, allowing Al-Andalusia to come to life.

A group of Palestinian businessmen, many educated abroad, have hooked up with foreign investors to put $4 million into the enterprise, using their contacts to help fill the shop with merchandise from around the Middle East.

Some is imported legitimately through Israel, other goods come via the smuggling tunnels that link Gaza to Egypt, giving shoppers an unusual amount of choice all under one roof.

"We originally wanted to build a proper shopping mall, but we started with this as a test," said general manager Ihab Al Esawi, who expects to recoup the original investment within 3 years, so long as war with Israel does not spoil their plans.

"You have to have faith," he said with a smile.

Up to 2,000 people a day visit the store, including many young children who endlessly ride the spanking new escalator -- only the second moving staircase to be installed in the enclave and the first to be put in a shop that is open to everyone.

"This is so exciting," said 10-year-old Bilal Haboush, clutching onto the handrail, his eyes wide open with joy as if he were riding the latest roller coaster at Disney World.

Elevated prices in Al-Andalusia and the nearby Metromarket, a supermarket that would not look out of place in a wealthy Gulf state, mean that only the Gaza elite can shop there regularly.

The U.N. Palestinian refugee agency, UNWRA, says that some 1.2 million of Gaza's 1.5 million inhabitants are registered as refugees, with unemployment running at around 45 percent -- one of the highest rates in the world.

"The combination of persistently high unemployment and the continuing deterioration of the real wages of working people underlie significant levels of poverty," UNWRA said in a report published in June.

But small pockets of wealth do still exist, and the Islamist group Hamas, which has a firm grip on power in Gaza, looks increasingly interested in seeing local businesses flourish as a way of diversifying their revenue streams and creating jobs.

It is hard to gauge Hamas' involvement in the private entities that have emerged over the past year, but they surely could not operate without prior approval, and if nothing else, they provide the cash-strapped group with badly needed taxes.

"Hamas is shifting from being just a military movement and a charity, toward ... looking to make money," said Omar Shaban, the head of the Gaza-based Pal-Think think-tank.

"Even Hamas now understands what it means to have a good life, that it is not all about Jihad and martyrdom. They are starting to go to hotel terraces with their families. It is a good thing. They feel they have something to lose," he added.

One of the more remarkable hotel terraces in the whole Middle East opened earlier this year in the northern corner of the Gaza Strip, close to a Hamas military training base and one of the territory's largest refugee camps.

Originally conceived as offices when building started in the 1990s, the designs later morphed into a 220-bedroom hotel which was due to be operated by the luxury Movenpick chain.

But they pulled out before a guest had even moved in after Hamas took control of Gaza in 2007 following a brief civil war. A subsequent tightening of the Israeli blockade, not to mention repeated clashes between the two sides, left the project on ice.

The dust-sheets were finally removed this year, with Spanish group ArcMed agreeing to run the newly named Al Mashtal, sending in a couple of experienced managers to train the 70 local hires.

Tourism is not an option in a territory where access to outsiders is tightly limited, but a handful of international aid workers plus the occasional wealthy Palestinian expatriate visiting family have stayed the night, while the restaurants and pool-side cafes see much more activity from well-heeled locals.

The pool itself is off limits for communal bathing because of local rules banning men and women from swimming together.

But without a radical change in the regional picture and a dramatic change in relations between Israel and the Gazans, it is hard to imagine the hotel's local client base widening.

"The middle class here is shrinking. People are falling into poverty or else just fleeing," said Gazan economist Shaban.

Standing like an oasis on the scruffy seafront strip, it is clear Al Mashral cannot escape the reality of life in Gaza. Just two weeks ago an Israeli missile strike killed two Islamist gunmen riding a motorcycle some 500 metres from the hotel.

So is it a triumph of hope over adversity?