Bullfighting to end in Spain's Catalonia, for now 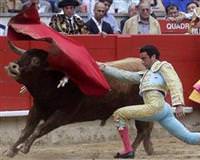 Bullfighting fans will shout "Ole" for the last time in Barcelona's Monumental bullring on Sunday before a ban on the sport takes effect across the northeastern Spanish region of Catalonia.

The regional legislature banned the centuries-old tradition -- which pits a sword-wielding matador in a skin-tight shiny suit and red cape against an enraged bull -- last year after Catalans signed a petition against it.

The bullfighting industry is still convinced it has a chance to overturn the ban and bring back the "toros" next season to Catalonia, the only mainland region in Spain that has blocked the sport -- or the art as its fans see it.

"I think the politicians will think twice about the ban and bullfighting will live on. And thank God because Catalonia has plenty of serious bullfighting fans and in a democratic country they should be able to go to a bullfight," said Moises Fraile, 64, owner of El Pilar, the breeder supplying bulls for Sunday's spectacle.

Some 20,000 spectators are expected to fill a sold-out Monumental -- the only bullring still operating in Catalonia -- for Sunday's blockbuster corrida starring celebrated Madrid "torero" Jose Tomas.

Tomas retired in 2002, but came back in 2007 at a bullfight in Monumental, his favorite ring. Since then he has made sporadic appearances and is the only bullfighter who can still sell out Monumental.

"There are several catalysts which could lead to the ban being overturned," said Paco March, bullfighting critic for La Vanguardia, Catalonia's top newspaper.

March said the conservative People's Party -- one of Spain's two main political forces -- is fighting the ban on constitutional grounds and the Catalonia Bullfighting Federation is collecting signatures to petition the Spanish Congress.

Spain's economic woes could also be a factor as regional governments such as Catalonia are under enormous pressure to cut spending and help the country trim its public deficit as it tries to dodge the euro zone debt crisis.

Such austerity measures could make it difficult for the Catalonian government to pay Monumentals owner, Pedro Balana, several million euros for the building.

Even if the pro-bull lobby manages to reopen Monumental, in a wider sense the blood is already on the sand.

Every year fewer Spaniards go to the bullring. The number of bullfights shrank by 34 percent between 2007 and 2010 according to official figures. Barcelona's Las Arenas ring shut in the 1970s and is now a shopping mall.

"I don't know anyone my age who would go to a fight. It's not a Catalan tradition but an Andalusian or Extramadurian one. The fact that the bull is treated so badly even before the fight should override any tradition anyway," said Laia Gomez, 31, a Barcelona customer service worker.

Younger Spaniards do not know the names of top-drawer bullfighters and most struggle to explain to a foreigner the intricacies and rules of the tradition.

Spain's general elections on November 20 could also play a role in the regions bullfighting fate.

Opinion polls show the People's Party or PP will win the election -- ending eight years of Socialist government -- and PP leaders could pressure Catalan politicians to reinstate bullfighting in exchange for financial support from the central government.

Catalonia is known for its constant wrangling with Madrid over greater autonomy and the right to maintain its separate culture, such as the Catalan language. Catalonia's bullfighting ban symbolizes its drive to differentiate itself from Madrid and its traditions.

The only other Spanish region to end bullfights was the Canary Islands, in 1991.

Many Catalans who feel that Madrid is imposing its culture on the region by means of language see bullfighting in a similar vein. However bullfighting has a Catalan tradition, the "correbous," in which the bull is subjected to stress but not killed.

Across Spain, anti-bullfighting protests are commonplace. Those against the "corridas" argue that the tradition has no place in modern-day society, where cruelty to animals is unacceptable.