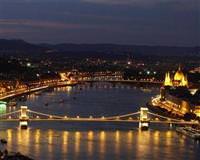 Budapest has everything needed to get you hooked.

It can be a big city or a small town. It's modern but ancient. It's got hustle and bustle and a laid-back cafe culture. So whatever you like, you'll find it.

Bring good shoes and a sense of adventure -- but leave your calorie counter at home.

5 p.m. The Castle is the best place to start and for a spectacular introduction, take the short funicular ride to the top. The ticket will buy you a million-dollar view, with Budapest at your feet. Enjoy the domes, bridges and the river.

Take a stroll around the castle's medieval streets and also stop in at the 14th century Matyas (Matthias) Church. For a taste of Hungarian wines, also consider a detour to the Royal Wines and Cellar Museum. But beware - the area is overpriced.

7 p.m. Walk down from the castle and cross the Danube on the Chain Bridge. Any self-respecting Hungarian will tell you it was completed in 1849 and was one of the largest bridges at the time. Facing the bridge is the Gresham Palace, an art nouveau palace now operating as a top-end hotel. Its amazing interior, mosaics and stained glass are worth the detour, so do sneak in.

8 p.m. Gerloczy Cafe next to City Hall is the best the city has to offer in terms of food, wine and service, and the cuisine is a nice mix between Hungarian and international so you get a slow introduction in local cooking. The place is famous for its bread, cheese and wine.

10 p.m. Now head to Rudas, a fully restored 16th century Turkish bath, for night life like you've never seen it. Most days Rudas is strictly single sex and you'd have to wear a tiny sheet that leaves your behind uncovered. Even eminent backsides such as that of the prime minister have been spotted here. But on the weekends Rudas is coed and open until 4 a.m., so enjoy the pools -- ranging from scalding to freezing -- and relax in the steam cabins or sauna. Enjoy the incredible architecture.

If you want something more lively, check if Szechenyi -- another thermal bath -- has a "cinetrip" party. (www.cinetrip.hu/en) DJs invade the bath on some weekends for a great party but their schedule is not always easy to pin down.

9 a.m. Start your morning on Margit-sziget, the lush island park on the Danube, and don't forget your running shoes for the 5K loop around the perimeter. It's where locals go to get their run in before the day starts so don't expect solitude, especially as Budapest rises early. Check out the ruins of the Dominican church and monastery, dating back to the 13th century.

10 a.m. Locals often spend their weekend in the hills surrounding the city so why not do the same? Find your way to the cogwheel (Fogaskereku) railway and ride it to the top of Szechenyi-hegy, where you'll find a true gem: the Children's Railway.

Opened in 1948, the former Pioneer's Railway was created to provide an escape for children in the war-torn city. To this day it is operated mostly by children and the ride will take you through the lust forests above the city. For another million-dollar view, stop at Janos-hegy Station and climb the observation tower.

1 p.m. Near the Huvosvolgy terminal of the Children's Railway, you'll find Nancsi Neni's restaurant, a Budapest institution. Eat whatever you want but leave room for dessert, since their cottage cheese balls, turogomboc, are a must.

3 p.m. Head back to town, there's still plenty to see there. You might want to catch a guided tour of the Opera House, or see the Basilica. You definitely want to take a nice long stroll along Andrassy Boulevard, dotted with high end shops and some of the city's best architecture.

7 p.m. A bit of walking should have made room for dinner, so visit Deryne Cafe, one of the trendiest restaurants in town. This is the place to go if you want to rub shoulders with the city's business elite. Despite its clientele, it's reasonably priced and the food is excellent.

9 p.m. Do not leave Budapest until you visit one or many of the "romkocsma," translated literally as ruin pub. These are trendy pubs, many set up in extremely rundown buildings. They started as seasonal outdoor hangouts set up on empty city lots or in condemned buildings but proved to be so popular, many have built for a longer stay. romkocsmak.hu

9 a.m. Explore the Jewish Quarter. A good starting point is the Synagogue on Dohany street, Europe's largest -- it seats almost 3,000 -- built in the middle of the 19th century and now serving a reviving community.

Hungary's Jewish community was devastated in the Holocaust and many of the survivors left after the war. But the streets and buildings preserve their memory and it's worth a walk. The newly renovated Gozsdu udvar (court) and the Rumbach Sebestyen Synagogue are some of the highlights.

12 p.m - For another bit of time travel, take a cab to the Romai-part on the Danube, a stretch of the city that time, in many ways, was kind enough to forget. Romai, or Roman as the area is commonly known, used to be the place for water sports and its waterfront promenade escaped development. Most boathouses were eventually replaced by low-key outdoor restaurants under the trees.

Getting there will take some time and it's best to take a cab. Walk a bit, then stop at one of the restaurants or shacks for some fish, with hake the speciality, and mixed pickled vegetables. Or you could try langos -- a piece of deep fried dough best enjoyed with lots of sour cream, cheese and garlic.

3 p.m. Why is the place called Roman? To find out, take short cab ride to Aquincum, a Roman town that had as many as 50,000 inhabitants in the third century. At its museum, you can see a working replica of a third century water organ and you can see how a Roman outpost on the edge of the empire lived.