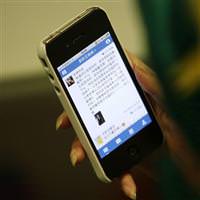 Communicating with local people in a foreign country can pose difficulties, whether it is asking for direction or making a special request at a restaurant.

But Vocre, a new iPhone app released by translation company myLanguage, aims to ease those problems by enabling users to translate their spoken voice into foreign languages.

It leverages crowd-sourcing to continually improve the accuracy of its translations to allow people to express themselves in the same way as native speakers.

"It's like asking your friend down the street, 'How would I say this in Spanish?" said Andrew Lauder, founder and CEO of myLanguage.

"It might not be something that's expected by a dictionary -- but it is the right way to say it when you go to that specific part of the world. It has the colloquialisms or slang of the area."

The app uses the iPhones accelerometer as a source of input so that users don't need to tap the screen. They simply hold the phone in one direction to record their voice, and then flip it in the other direction to make it talk in the translated language.

Lauder said that the company's expertise lies in the translation technology, rather than the voice transcription or human speech technology, which are driven by Nuance (speech-to-text) and iSpeech (text-to-speech) respectively.

The translation engine trains itself based on user-contributed corrections, queries made by other users in their native languages, as well as their own linguists, to determine the most common way a native speaker would say a particular phrase.

"We've really invented a new type of translation technology that learns every single time a translation is done," said Lauder. "Nobody has focused on what's the right way of saying this. And that's important because there's meaning attached to what we say -- people will know if you're saying something funny, for example."

Although the technology has been praised, the app has been criticized for its ease of use and pricing. Lauder said the company hopes to resolve both issues in an update expected this week that will make the app more intuitive to use, and also introduce a new pricing model.

The pricing will move away from a credit-based model toward a subscription-based model. The app will be free for use for the first 24 hours upon initial launch, but then will require a weekly or monthly subscription.

Competitors for the app include Google Translate, Jibbigo (both of which have free versions of their apps) and SmartTrans, which also makes use of Nuances voice recognition software and costs $19.99.