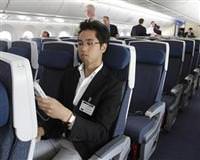 Dressed in specially designed All Nippon Airways livery, with a big, bold, blue "787" splashed at its fore, Boeing Co's Dreamliner will fly from its Seattle birthplace to Tokyo on Tuesday, and, just over a month later, begin active service for the Japanese carrier.

Loyal passengers of other 787-recipient airlines will have months, possibly years to kick their heels before experiencing the high-tech, $185-$218 million craft. Should they wait with bated breath for what Boeing 787 Chief Project Engineer Mike Sinnett has called: "The most technologically advanced commercial airplane in history?"

Marketed as a panacea to passenger discomfort, the Dreamliner's inauguration is, after three years of delivery delays, being closely monitored by the travel industry.

"Comfort and cost are concerns of the business traveler and the 787 will deliver extreme advancements in fuel efficiency and many traveler features that will improve the journey," said Michael Qualantone, senior vice president & general manager, American Express Global Business Travel.

Indeed, this twin-engine, bendy winged, widebody craft has raised the bar for fuel efficiency. Some 50 percent by weight of the 787 airframe is lightweight carbon-fiber composites that could, Boeing says, help reduce fuel costs by 20 percent.

Whether travelers will benefit from the lower fuel consumption will depend upon airlines' cost structures.

According to Blake Emery, Boeing's director, differentiation strategy, the composite airframe also allows a more comfortable cabin pressure (the equivalent of 6,000 feet "cabin altitude," instead of the common 8,000 feet). The air can also be recycled much more frequently than is possible in aluminum airframes, where the process shortens aircraft life.

Though rebutting the suggestion that closer-to-sea-level cabin pressure will alleviate jetlag, Emery told Reuters: "Our goal is for people to feel better because of an aircraft experience, rather than feel beat up."

The 787's composite make-up also allows for more humidity in the cabin, which Emery says will "reduce symptoms relating to dryness."

Whether frequent travelers will notice a substantive difference flying longhaul on the 787 rather than, for example, EADS' Airbus A380, or even the forthcoming A350, remains to be seen. As David Parker Brown, aviation blogger and owner of www.airlinereporter.com, said: "Putting a few hundred people in a small space for more than several hours will always cause discomfort."

Boeing has drilled deep to counteract this assumption. Interior-design tweaks have resulted from years of research. For a decade, says Emery, the company has been working with its "customer's customer -- the flying public -- to try to figure out what is going on emotionally, psychologically."

For most passengers, research findings suggest, initial boarding was of utmost importance; Boeing worked with artists and architects to create arched entranceways which provide a relaxing contrast to the "stress of pre-flight security."

Dreamliner passengers can expect roomier seats, more storage and larger, manually dimmable windows. Economy class will see some luxury additions, with a bar, female-only lavatories and Panasonic entertainment on demand for every passenger.

Finding a new use for an existing technology, LED lights installed in the 787 cabin, says the planemaker, allow the ceiling to appear higher, while easing the transition between day and night by gradually bringing in more or less light.

Those skeptical of the idea that travelers will rise refreshed from any longhaul flight and leap straight into a business meeting include Dr Gregory Belenky, research professor and director of Washington State University's Sleep and Performance Research Center.

"It all depends on the amount of sleep you're able to get on the plane," Belenky said, arguing that while humidity, pressurization and lighting are all factors, "if you're flying through your circadian night, then how well you'll sleep depends on how flat you are able to get."

As well as getting a better plane-ride's sleep, passengers are set to benefit when the 787's long-range variant connects destination A to destination C without a stop at B. An end to wasted hours transiting at hub airports may be worth more to travelers -- and their employers -- than a good night's sleep.