48 hours in Munich during Oktoberfest 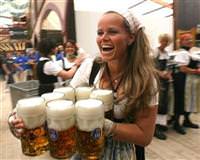 Got 48 hours to spare in Munich during Oktoberfest, the world's largest fair?

Oktoberfest was first celebrated 201 years ago when Crown Prince Ludwig married Princess Therese and invited Munich's citizens to join the party on the Theresienwiesen ("Wiesn").

These days the festival is held mostly in September as October gets too cold. This year it runs from Sept 17 to Oct 3.

Reuters correspondents with local knowledge help visitors get the most out of a visit to Oktoberfest, where a record amount of beer -- 7.1 million liters -- was consumed last year.

5 p.m. - Gear up for the Oktoberfest by shopping around for your own Bavarian garb, which has come back into fashion over the past decade.

Try wearing lederhosen (if you're a man) or a dirndl (for women) if you're up for the authentic feel. The regional clothing now exists in a dazzling spectrum of styles from the austere and traditional to modern and mildly pornographic.

You can often lay your hands on the kit anywhere in Munich from the luxury boutiques on Maximilianstrasse to the second hand shops tucked away in side streets, as well as online.

Other regional dress, from Scottish kilts to Dutch dress and clogs, are also warmly welcomed.

Clad in your new outfit, take a first stroll across the "Wiesn" to soak up the atmosphere: the aroma of cotton candy, roasted almonds and the scent of barley and hops of the main protagonist, the beer.

Some 6.4 million visitors from Germany and as far afield as the United States attended the Oktoberfest last year.

7 p.m. - Take it easy tonight if you plan to return for another session tomorrow.

If you're keen to rub shoulders with celebrities, head to the Hippodrom tent where Bayern Munich footballers, former tennis star Boris Becker and German actors are often sighted.

Young locals favor the Schuetzen-Festzelt tent, famous for its suckling pig in maltbeer. Even younger locals head to the Schottenhamel where Oktoberfest's first keg is tapped.

Traditional charm can be found in the Hacker tent -- decked out in white and blue, colors representing Bavaria's skies -- at the Braeurosl or Augustiner tents. The latter is the only brewery that still uses wooden kegs for storage. Its beer is also served in the Fischer Vroni tent.

The Oktoberfest tents serve local delicacies such as oxen, pork knuckles and cunningly thirst-provoking, salty pretzels. But for a less pricey version and possibly more authentic Munich meal, try one of the city's many beer gardens.

The Augustiner near the Central Station is a favorite after-work meeting spot. The Chinese Tower in the English Garden is a classic, but farther away from the main festivities. Hirschgarten is more suited for families.

If the weather is not being kind to you, you could head to the area around Marienplatz to check out the city hall and the cathedral and find a restaurant in the pedestrian zone. The Bratwurst Gloeckl offers good traditional food.

11 a.m. - If you want to get into a beer tent but have not made a reservation, be prepared to turn up before noon. Tents open at 9 a.m. on the weekends and while there is seating for some 115,000 people in total, they shut once they are full.

On the final weekend last year, access to the entire Wiesn site had to be shut off for several hours due to overcrowding.

For your first view of the fair, try a turn on the Ferris wheel. For the more adventurous, try one of the stomach-turning rollercoasters now, rather than after sampling the beer.

The Toboggan, offering the sight of punters trying to stay upright on an uphill conveyor belt, is an all-time favorite. Its entertainment value makes up for its lack of gut-churning potential.

Once you are inside a tent, where the oompah of the brass bands mingles with the cheer of merry drinkers and sing-alongs, find a table, order drinks and food, and have fun. Prost!

Be aware though that the beer not only comes in a 1 liter 'mass' glass but at around 6 percent is also stronger than the brew you might be used to. Pace yourself or risk becoming a Bierleiche (literally translated: a beer corpse).

Learn a few key Bavarian phrases to navigate your way around the tents: Biddscheen for please, Bierdimpfe for "tavern potato" for a notorious beer drinker (hint: don't become one) and Heisl for toilet.

11 p.m. - All but a few tents have served their last round now and will close shortly. A few places, like the Schuetzen-Festzelt, have a ritual last song of the night. So if you're into Rainhard Fendrich -- an Austrian pop star who goes down well with the Bavarian crowd too -- head to the Schuetzen for a recital of his love song "Weus'd a Herz host wia a Bergwerk" ("Because you have a heart like a mine." Yes, it works better in German).

You can either go on to Weinzelt (the wine tent) or the Kaefer tent, both of which still serve alcohol after midnight.

Alternatively, there are after-parties all over the city. Follow the locals. Surely, by now you will have befriended some. If you haven't, it may be because you didn't check out Oktoberfest's very own Bavarian dictionary at: www.oktoberfest.de/en/lexikon/.

In Schwanthalerhoehe, the district that lies downtown just beyond the monumental statue of Bavaria, many bars remain open and rowdy all night long.

If clubbing is your thing, however, and you want to dance off some of those beer-calories, try out the stylish -- if a tad pretentious -- P1 club.

Located underneath the Haus der Kunst art museum, a Nazi-built structure which hosted the infamous 1937 exhibition of "degenerate art," P1 is a favorite haunt for Munich's upper class and celebrities.

The doormen are ruthless in their entrance policy, so glam up or you'll be left standing in the cold.

9 a.m. (or whenever you can make it out of bed) - To cure your hangover, try a walk around the English Gardens, a rare oasis of tranquility during the Oktoberfest and one of the world's largest urban parks -- more expansive than even New York's Central Park.

Don't be taken by surprise if you wander into the area reserved for naked sunbathers. The Free Body Culture (FKK) movement was founded in the early 20th century and succeeded in taking much of the smut and embarrassment out of nudity.

Another curiosity is the surfers riding the small waves at the mouth of an artificial stream running through the gardens.

An alternative relaxing destination just out of town is Lake Starnberg, formed from ice age glaciers from the Alps and offering stunning mountain views on a clear day.

The hardy can attempt a dip in the 21-km long freshwater lake, go windsurfing or sailing, while the more laid-back can simply stroll along the shore with its brightly painted wooden boathouses or hop on a ferry.

And if you still haven't had enough of the Oktoberfest, return to the Wiesn to check out more beer, rollercoasters and amusement rides.

Look after your belongings, however. So far this year's lost and found's list of curiosities includes: 460 personal identity cards, 130 mobile phones, a Viking helmet, a walking frame and several wedding rings.