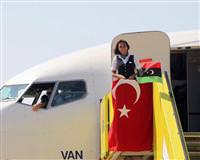 A Turkish Airlines passenger plane landed in Tripoli's Mitiga airport from Istanbul on Saturday in the first international commercial flight to Libya since the ousting of Muammar Gaddafi in August.

Flags representing Turkey and Libya's new leadership flew outside the airport as the plane landed while inside the building, passengers waited patiently and queued at the check-in desk to board the return flight.

"We are going to Turkey for business because it has been a long time since we travelled. We are happy that the airline is back in the meantime and we thank God," said Tripoli resident Mohammed al-Jaroushi.

The United Nations Security Council resolution imposed in March a no-fly zone for civilian flights over the country as part of international efforts to protect anti-government protesters under attack from Gaddafi loyalists.

Diplomats say civil airliners and flights carrying official delegations are allowed to fly into the country provided they notify monitors of their flight plans in order to avoid NATO attack.

A diplomat contacted by Reuters said he believed the Turkish Airlines flight would have had special clearance to enter the country.

Tripoli's main international airport, which is a separate facility south of the capital, has yet to resume normal operations.

Turkish Airlines Chief Executive Temel Kotil told reporters: "We started in Benghazi as humanitarian support and also we had a flight here. We've been bringing people here and we've been going back and bringing (aid) to the needy and the wounded people."

"Best wishes to Libya. God willing, it will eventually be much better than today."

A U.N. Security resolution on Sept. 16 eased some sanctions on Libya but kept the no-fly zone in place, despite calls from Russia and South Africa for it to be lifted.

However, the resolution did remove an obligation on all member states to deny permission to any aircraft registered in Libya, or owned or operated by Libyan nationals or companies to take off from, land in or overfly their territory.