Turkey is most popular country for Russians 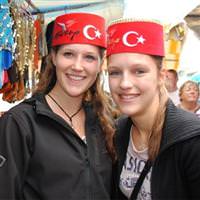 Turkey continues to be the most popular country for Russian tourists.

According to research conducted by a leading tourism firm in Russia, in 2011 Turkey was the most sought after country for Russians.
According to research findings, Turkey was followed by Egypt, Greece and Spain in terms of most visited nations by Russians this year. Notably, Tunisia, which in past lists was the fifth most travelled to country, this year dropped down to eighth due to the political crisis that transpired this year.
Russian tourists were mostly drawn to holiday resorts in Belek, Kemer and Side, whereas in Egypt they mostly frequented Burgada and in Greece, Crete was the island of choice.
According to the findings, 25 percent of Russian tourists stayed in five-star hotels, 20 percent in four-star hotels, while ten percent preferred three-star hotels for their vacation stay. Russians tended to prefer all-inclusive stays and mostly selected seven-day stays.