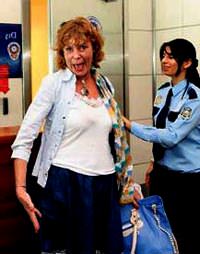 During a Turkish Airlines flight from Istanbul to Stockholm, intoxicated passenger Anita Wattjersson attempted to open the emergency exit door. The pilot was forced to return the plane to Istanbul.

An attempt by an intoxicated Swedish passenger, Anita Wattjersson, to open an emergency exit door while en route a Turkish Airlines flight from Istanbul to Stockholm, resulted in widespread panic on the aircraft.

The plane was redirected back to the Atatürk Airport shortly after the incident transpired. The flight had departed yesterday from Istanbul's Atatürk Airport at 08:50 and was carrying 126 passengers. Due to the effects of alcohol intoxication, the 57-year-old passenger, Wattjersson, attempted to open the emergency exit to the TK-1793 numbered Airbus 320, named "Yozgat". The cabin assistants took the situation under control and then informed the pilot of the incident. The pilot decided he did not want to keep flying with the problematic passenger on board and decided to redirect the plane to the point of departure. At 10:05 yesterday, the aircraft made a problem-free landing at Atatürk Airport. Police were called to the plane and Wattjersson was removed due to posing as a risk to flight safety and taken to the Department of Security in the Atatürk Airport International Terminal. The plane took off once again headed for Stockholm. After the passenger provided her testimony, she was then placed in custody of officials from the TGS (Turkish Ground Service) serving the airport.

The Swedish passenger in question, Wattjersson smiled posing for the cameras. When asked by journalists why she wanted to open the door, she answered off topic by stating, "I was getting ready to drink some coffee and was reading a book on the 1986 murder of the former Swedish Prime Minister Olof Palme."

Testing showed Wattjersson's alcohol level to be 1.39 promile. Wattjersson will be transferred from the custodial prison she was being held at to the Bakırköy Public Prosecutor's Office today.