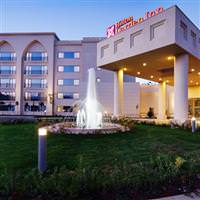 According to a written announcement released by Hilton Garden Inn, with the new Hilton Garden Inn Mardin the brand has now taken a new step towards expansion in Turkey.
Reminding that historical Mardin, with its unique environment and antique buildings is listed as one of the cities in UNESCO's World Cultural Heritage Sites, the announcement goes on to state the following:
''Located approximately 17 kilometers' distance from the Mardin Airport and just four kilometers away from the city center, Hilton Garden Inn Mardin is situated in a position with a view of the Mesopotamian plains. The Hilton Garden INN boasts 162 rooms with a number of the brand's trade characteristics including sleep system beds, Herman Miller design ergonomic chairs and free high-speed wireless internet. Hotel guests can choose to frequent the Sumac Grill restaurant and enjoy an unforgettable evening dinner or may visit the Pavilion Pantry for snack-type foods, which is open 24 hours. Hilton Garden Inn Mardin will also have a 24-hour fitness center, covered pool, children's pool, jacuzzi, sauna and steam bath. In addition, the hotel's business center, which will be open 24 hours a day, will offer services such as printing, photocopying, high speed internet as well as services for a number of other daily needs."
In the announcement, Hilton Worldwide Europe District Chairman Simon Vincent states that he is pleased to announce that with the opening of this new hotel in the magical city of Mardin, they have now acquired a total of 5,000 rooms in Turkey. Vincent goes in to state that within just a few years, and with the ongoing investments in ten hotels, they have practically doubled their Turkey portfolio. "This is proof of our brand's increasing popularity in the international market."