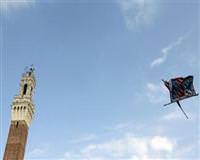 Often overshadowed by its bigger and more powerful ancient rival Florence, Siena has always been a jewel in Italy's rich crown of cultural heritage and an ideal place to immerse yourself in the history of Tuscan art.

Old Siena, spread over three hills in southern Tuscany and surrounded by medieval walls, is relatively small and can be easily explored on foot. But its magnificent churches and palaces contain such a wealth of art that a weekend is hardly enough to discover them all.

Early December is a perfect time to explore Siena. The crowds of summer tourists have dwindled and the city's terracotta-colored rooftops provide a stunning contrast to the bright autumnal foliage in the surrounding hills.

6 p.m. - Choose a place to stay in the historic centre where options range from modestly priced hotels like Pensione Palazzo Ravizza (www.palazzoravizza.it) to the luxury Grand Hotel Continental (www.grandhotelcontinentalsiena.com)

If you also want to enjoy peace and quiet and reconnect with nature on your break from the stressful city life, book yourself into one of many farm resorts which dot the rolling hills around Siena. Secluded Villa Ferraia, a 13th century hamlet turned into an exclusive resort, offers star-watchers its own astronomical observatory. (www.villaferraia.com)

7 p.m. - Kick off your holiday with a glass of local wine, traditional Chianti or its upscale cousins known as super-Tuscans, such as Ornellaia or Sassicaia, at one of the numerous wine bars lining meandering cobbled streets of the old city.

To enjoy a stunning view while sipping your wine and nibbling on traditional Tuscan appetizers, head to Enoteca Italiana, a public wine promotion body based in the 16th century fortress overlooking Siena, whose cellar boasts more than 1,500 wines.

9 p.m. - Continue with a classical music concert at Accademia Musicale Chigiana. A palace which hosts the academy, a musical instrument museum and an art collection dates back to the 12th century and is worth a separate visit.

11 p.m. - Those looking for a wild night life could be a bit disappointed by Siena where locals prefer to spend a night out in a cozy restaurant or wine bar. Private parties are often organized by Siena's 17 contradas, or historic districts within ancient city walls, which are still the pillars of local life.

A few bars stay open late, to the joy visitors and university students. Casa del Boia bar, based in what used to be the local executioner's house connected to the execution site via an underground tunnel, is among the most popular hangout places.

9 a.m. - head to Piazza del Campo, Siena's main square and its beating heart since the Middle Ages. The unique, shell-shaped square is a favorite gathering place for locals and tourists and the stage of Siena's famous Palio horse race.

The race which traces its origins back to the Middle Ages and celebrates the Virgin Mary, is held twice a year, on July 2 and August 16 with 10 of Siena's 17 contradas competing for a banner called palio. On some very rare occasions a third palio in a year has been held, and locals joke that if the euro survives Europe's unfolding sovereign debt crisis it would be a valid reason for an extraordinary Palio.

Climb more than 400 steps to get to the top of Torre del Mangia bell tower which rises nearly 100 meters high next to Palazzo Pubblico, to enjoy a 360-degree view of the city.

11 a.m. - To restore energy after climbing the tower, take a creamy cappuccino or an espresso with traditional Sienese sweets, almond cake panforte and almond ricciarelli biscuits, at the elegant cafe Nannini, one of the oldest in town.

Once your batteries are recharged, keep walking along swirling narrow streets and pop into old churches full of frescoes and paintings by famous Tuscan artists and richly decorated palaces. Teatro dei Rinnovati which is based in Palazzo Pubblico and dates back to the 16th century opens its doors to visitors on days when there are no performances there.

3 p.m. - After a lunch at one of numerous small restaurants in the centre which serve pasta with hare or wild boar and grilled steak and other traditional Sienese cuisine, it's shopping time. Pop into elegant small boutiques selling locally made clothes, shoes and souvenirs which seem to be successfully competing both with omnipresent Italian fashion brands and foreign rivals.

6 p.m. - Grab a table at a sidewalk cafe to drink an espresso or a glass of wine and watch locals on their traditional evening stroll, or passeggiata, in the town centre. Watch entire families dressed to impress and marvel at the glamorous women who manage to remain elegantly balanced on stiletto heels while traversing Siena's steep cobbled streets.

8 p.m. - If you visit Siena during the truffle season in November or December, don't miss the various dishes, from pasta to chocolate, sprinkled with truffles unearthed using dogs in the nearby forests.

Head to Antica Osteria da Divo (www.osteriadadivo.it) which claims that its dining rooms are carved out of caves dating back to the Etruscan era more than 2,000 years ago, or to La Taverna di San Giuseppe (www.tavernasangiuseppe.it) which traces its history back "only" to the 12th century.

9 a.m. - Start your day by heading to Siena's cathedral, or Duomo, one of Italy's greatest Gothic churches with its towering white, green and red marble shape.

Begun at the end of the 12th century, construction of the Duomo had been largely completed in the 13th century though some works on its magnificent facade continued well into the 14th century when Siena's rulers decided to enlarge the cathedral and build the biggest church in Italy, challenging Rome's dominance.

The ambitious project to build the new Duomo which was to engulf the existing one, was stopped by the plague of 1348 which devastated Siena, but its uncompleted great facade still stands erect and visitors can climb 130 steps to get yet another stunning view from there.

The most famous feature of the original Duomo is probably 56 inlaid marble panels depicting biblical and historical scenes and known locally as picture Bible.

11 a.m. - Cross a square in front of the Duomo to visit a vast museum complex of Santa Maria della Scala housed in a former hospital, the city's oldest with more than 1,000 years of history.

While restoration works are still underway, you can visit more than half of its 40,000 square meter area to admire its halls, chapels and an internal church. The complex hosts several museums and various temporary exhibitions.

3 p.m. - After lunch, time is left for the final stroll around the old city.

If you are still close to the Duomo, head to Pinacoteca Nazionale picture gallery which houses numerous masterpieces by famous Sienese artists such as Duccio di Buoninsegna, Simone Martini and Ambrogio Lorenzetti.

Climb a nearby hill to visit Chiesa di San Domenico, the imposing Gothic church known for its links with Italy's famous saint, Santa Caterina di Siena, whose head is on display there.

Standing next to the church you can enjoy a magnificent view of the Duomo and the rest of the old city, an ideal place to say goodbye to Siena and make your promise to return.