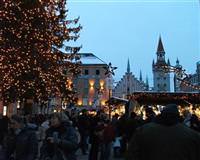 Mulled wine, snowy landscapes and shopping for handcrafted gifts beneath the starry lights of a traditional European holiday market are so popular at this festive time of the year that the members and editors of travel website VirtualTourist.com

While most people associate the Bavarian capital with its famous Oktoberfest, it also holds a fantastic Christmas market on the Marienplatz in the center of the city. While sipping on Gluehwein (mulled warmed wine) or beer, visitors can find many traditional Bavarian gifts, like wood carvings and gingerbread called Lebkuchen. Though the market offers many food options, Virtual Tourist members recommended also visiting the Viktualienmarkt, Munich's daily outdoor farmers market, which lies just around the corner from the Marienplatz.

Cologne, like many towns in Germany, has multiple Christmas markets. The primary market is held at the Cathedral, but another market with slightly more-expensive goods, the Neumarkt, is also a great place to find presents. Cologne's food offerings are slightly more traditional: bratwurst, yeast dumplings with jam and vanilla sauce, crepes, and chocolate. A special rarity: one of the city's markets, the Floating Christmas Market, can be found aboard a boat docked at the Rhine River.

Vienna takes the holiday season very seriously, with decorations that rival any city in Europe. The prized Christkindlmarkt on Rathausplatz also runs the longest of our Top Ten markets, starting in mid-November and running until Christmas Eve. Millions of visitors come each year to experience the picturesque atmosphere and browse the beeswax candles, wooden toys, and Christmas decorations offered. In keeping with the musical history of the city, there are also choir performances in City Hall and a daily wind ensemble performance by the Christmas tree.

The two best Vanocni trhy (Christmas markets) are held in the Old Town Square and on the long slope of Wenceslas Square. While the markets do feature the expected wooden toys and holiday décor, they also sell Czech specialties, like Bohemian crystal, marionettes, and ceramics. The food is also slightly different from the German standard: though sausage, gingerbread, and grog are offered, there are also vendors with corn on the cob and Trdelnik (cooked dough with cinnamon and sugar).

Copenhagen's historic Tivoli Gardens serve as a meeting place year-round, but no visit could compare to seeing the park during the holiday season. The decorations and light display are truly unparalleled; they even have fireworks between Christmas and New Year's! In addition to the traditional glgg (steaming hot mulled red wine), this year's market will feature a new Russian theme. A new delicacy food area, featuring Russian borsht and stroganoff, will also sell Christmas sweets, Italian treats and French culinary delights.

Almost every city in Germany has a Christmas Market, but one consistently recommended option is Nuremberg. It is noted for its variety of German delicacies, from gingerbread and sweet roasted nuts to Gluehwein, the mulled wine served hot. Enjoy the Gluehwein while perusing a variety of wooden crafts and intricate ornaments, including those specific to the city: figures made out of prunes and stiff metal angels. Once you are finished, you can return your mug for a small savings, or keep it as a souvenir!

For centuries, the French/German border has swayed to either side of the Alsace region, so it makes sense that Strasbourg, France, would have the oldest and most famous Christmas market in France, the Marchés de Noël. The market has been held around the town's cathedral since 1570, and in addition to the spiced wine usually offered at Christmas markets, those in Strasbourg have a tradition of spicy hot orange juice. Strasbourg also provides an ideal starting point to explore some of the well-known but smaller nearby Christmas markets, like Baden-Baden, Karlshruhe, & Stuttgart in Germany.

Some may debate that the Lincoln market is the best in the UK, VirtualTourist.com members prefer to host their annual Christmas markets meet up in Manchester, UK. While Lincoln's market only runs for 4 days, Manchester's market is open for five weeks. Members noted that in addition to the great "European Christmas Market" in Albert Square, there was a new "French Christmas Market" on King's Street that sold French foods, lavender products and Provençal herbs.

At only 10 years old, Brussels' Christmas market may be the youngest of the bunch, but the "Plaisirs d'Hiver" brings a more youthful, activities-focused approach to the Christmas market. In addition to the 240 chalets, there is an illuminated route throughout the city, leading visitors from the Marche aux Poissons to the light spectacle at the Grand-Place. Parents can grab one of Brussels' famous waffles or mulled wine while children take a lap around the skating rink, ride the Ferris wheel, or head down the sledding track.

Besides being a banking hub and the home of the WTO, Zurich also boasts Europe's biggest indoor Christmas market in its ShopVille-RailCity railway station. In addition to over 160 wooden chalets, there is an enormous Christmas tree, sparkling with over 5,000 Swarovski crystal ornaments.