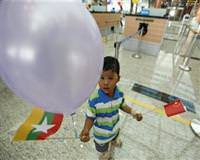 Myanmar opened a new international airport in its capital Naypyitaw Monday, with regional leaders the first to use the new facility that will handle up to 65,000 flights per year.

Naypyitaw International Airport will be Myanmar's third international facility after Mandalay and the commercial capital Yangon.

The airport was developed by Burmese construction company Asia World with technical assistance from Singapore engineering firm CPG Consultants Pte. Government sources said China provided financial assistance for the project, the cost of which has not been disclosed.

It was opened to coincide with the staging in the city from Tuesday, of the fourth summit of the Greater Mekong Subregion, made up of Myanmar, Laos, Cambodia, Vietnam, Thailand and China.

Construction began in April 2007, two years after the then military government announced it was switching the capital from Yangon to Naypyitaw, a city built in secret on a mountain plateau about 390 km (240 miles) further north.

According to the Transport Ministry, the airport has a 3.6 km runway, a control tower 69 meters high and 10 passenger boarding bridges and can take 50,000 to 65,000 flights annually.

The main airport in Yangon has a capacity of 2.7 million passengers a year.