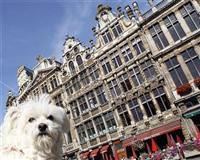 Brussels has long been defined by trade. Once it was a crossroads where silk and tapestries changed hands. Now it's the capital of Europe for the exchange of ideas and extremely tough negotiations, especially of late.

Forty-eight hours is barely time to scratch the surface of past and present identities, but correspondents with local knowledge offer tips on how to make the best of a short stay.

9 a.m. - Brussels divides into an upper and a lower town. The upper part is home to the European institutions and a huge expatriate community of politicians and lobbyists, energetically promoting competing causes.

You can get there on a short Metro ride from the Eurostar terminal if you've arrived from London or Paris.

Get off at Troon/Trone, a walk away from place du Luxembourg, home to the European Parliament.

Its glass and steel architecture, admired by some and hated by others, sums up the mixed emotions the European Union inspires.

Like it or loathe it, the European Union is fundamentally well-intentioned and visitors are warmly welcomed in the bloc's 23 official languages. Brussels itself operates in at least two, Flemish and French, and street and place signs are bilingual.

Before having a dose of politics, you would do well to begin with a hearty breakfast at Karsmakers at 20, rue de Treves.

Bagels, with lashings of cream cheese, and granola, generously dosed with chocolate, are specialities.

They should give you the stamina to attend a parliamentary sitting and have the history and EU processes explained.

You may find yourself gripped, in which case you could brave the ugliness of rue Beillard/Beillardstraat, usually snarled with traffic, and make your way to place Schuman to check out the EU administrative buildings.

Place Schuman is named after one of the founding fathers of the bloc.

Crossing from one side of it to the other involves negotiating the underground labyrinth of a metro station that has been a building site for years, and once again, the work-in-progress of European legislation, with its wrong turns, poor sign-posting and dead ends, springs to mind.

On either side of it loom the towers, where EU Commissioners, the EU equivalent of ministers, and national governments thrash out legislative proposals in a warren of offices and meeting rooms.

1 p.m. - Breakfast at Karsmakers shouldn't leave you needing much lunch, but you could head for rue d'Archimede/Archimedestraat, along with all the "eurocrats."

The choice of eateries include British-style pubs and Casa Italiana for very hearty, no-nonsense Italian.

2 p.m. - Staying in the upper town, you now have time to check out the neighborhoods of Ixelles and St Gilles, where many of the expats live.

From Schuman, take a Metro to Avenue Louise and then either walk down it or talk a tram.

If you walk, you can peer through the glass door panels of number 224.

Tucked away between the shop fronts, restaurants and modern hotels, Hotel Solvay is an example of the glorious art nouveau buildings designed by Victor Horta, one of Europe's prime exponents of the art nouveau movement.

It was commissioned by Armand Solvay, the son of the wealthy Belgian chemist and industrialist Ernest Solvay, and no expense or attention to the last, curling detail was spared.

Visits are by appointment only, but the Horta Museum at 25, rue Americaine, in nearby St Gilles, is open to the public between 2 and 5:30 pm, except on Mondays.

You might have to queue, but it's worth a wait to experience one of the most perfect examples of art deco. Swirling iron-work, twisting candelabras and light fittings harmonize with plain concrete, light wood, polished to a silky sheen, and oriental treasures.

4:30 pm. Enjoy the village-like atmosphere around Rue du Page. Mooch through the independent shops. Stop for afternoon tea or maybe a beer, but be careful, it's deceptively strong.

7:00 pm. Dinner at La Quincaillerie, the French word for ironmongers, which is what it was before it became one of Brussels' best-loved brasseries.

8:00 pm. You could linger, or you could ask the restaurant to order you a taxi to whisk you off to Flagey for one of the range of jazz and classical concerts Brussels has on offer, once again in an art deco setting.

As alternative pre- and post-concert options, the uber-trendy Place Eugene Flagey also has a wealth of restaurants.

10 a.m. - Choose between two of Belgium's most famous sons: Herge, creator of fictional boy journalist Tintin, or Magritte, exponent of surrealism, best known for men in bowler hats and his pipe, which is not a pipe.

The world's most extensive collection of Magritte is housed in the Musees Royaux des Beaux Arts, Rue de la Regence/Regentschaps.

Minor Tintin outlets can be found all over Brussels, but the mecca for the true enthusiast is a new museum at Louvain-la-Neuve, one of Europe's newest cities, a 40 minute train journey from Gare Centrale.

Opened in 2009, it's a huge prism with glass bays through which you can stare out at the surrounding woodland if you need a reality break from cartoon-land.

You also might find three floors of heroic adventures give you an appetite, in which case Le Petit Vingtieme, named after the supplement in which Tintin was first published, offers unexpectedly sophisticated dining for grown-up fans.

The Tintin experience could take up most of your day.

Magritte, however, will leave you with plenty of time for lunch in place du Grand Sablon, a kind of stepping stone between the upper and lower towns, round the corner from the royal museums.

12:30 pm. The Sablon is lined with shops selling the finest and most expensive Belgian chocolates and cafes and restaurants for lunch/coffee.

You might also visit Notre Dame du Sablon, one of the best surviving examples of Brabant Gothic architecture, with its huge stained glass windows and an impressive, carved pulpit.

Outside the church at weekends antique sellers ply their wares, often including art deco treasures and some of the many African artifacts that find their way to Brussels.

2:30 pm. - If you're still hungry for Brabant Gothic and spectacular carved pulpits, Brussels' cathedral, just down the hill from the Grand Sablon, awaits.

4 p.m. - Time for tea or maybe hot chocolate in the nearby Grand Place, a square so unabashedly elaborate it is a UNESCO world heritage site.

It's packed with former guildhouses, outdoing each other in ornate decoration, and a town hall, which behind the fairy-tale façade is still operational. Its 15th-century spire is 96 meters (yards) high.

Reuters has its own claim on this grandest of Grand Places.

From 1850, the founder of the Reuters News Agency Julius Reuter, conducted a three-way service for businessmen and newspapers from Aachen, delivering news and prices to and from Berlin, Vienna and Paris, via such telegraph lines as existed and railways and postal services elsewhere.

Between Brussels and Aachen there was a gap and pigeons, released from one of the fabulous guildhouses, bridged it.

7 p.m. - Holding that thought, meander through the nearby streets to the narrow, medieval Rue des Bouchers (Butchers' Street).

Every address is a restaurant and virtually every one sells mussels.

As the restaurateurs, who stand in their doorways to lure in passing custom will explain, mussels became the national dish as they were cheaper than oysters.

The prime source of Brussels mussels is Zeeland in the Netherlands, where a mix of sea water and fresh water is said to give them a unique flavor.

Rue des Bouchers serves mussels in various guises, with cheese, with tomato or marinated in a pot and with abundant frites.

After dinner, round off your trip with a digestif in the rich art deco surroundings of jazz bar L'Archiduc in rue Antoine Dansaert.