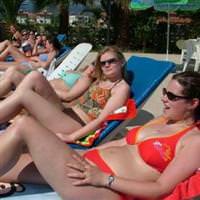 One out of every three foreigners that arrived to Turkey stayed in their own home or with friends.

Out of the foreign tourists who visited Turkey, 50.8 percent were males while 49.2 percent were females.
Upon closer inspection of the education level of foreign visitors, one out of three was a university graduate. Thirty-four percent of tourists had a university degree, while 33 percent had completed high school, 13.1% had a graduate degree and 11.9 percent had completed middle school with just 4.7 percent consisting of elementary school graduates. Three percent of visitors were either illiterate or had never been to school.
Out of the foreign tourists Turkey hosted this year, 67.3 percent were from the middle income group. The number of tourists from the higher income group was less at 15.5 percent, while the percentage of foreign tourists from the lower income group was even lower at 13.5 percent.

ONE OUT OF EVERY TEN TOURISTS WERE RETIRED

Fifty-seven percent of tourists expressed their main reasons for visiting as being sightseeing, for fun and for athletic or cultural purposes, 10.6 percent of tourists came to visit relatives or friends, while 6.3 percent came for business reasons and 3.4 percent came to shop. The remaining percentage was made up of visitors that came for transit, religious, health or educational purposes.
OVERNIGHT STAYS ON THE RISE

Last year, the number of overnight stays by foreign tourists increased by 12.7 percent compared to the year prior, reaching 264,524,675 visitors.
The effects of the legal adjustments made in recent years geared towards allowing foreigners to purchase real estate in Turkey was evident in this year's TÜİK figures.