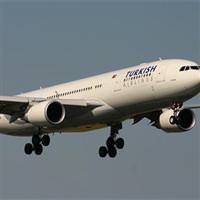 Turkish Airlines (THY) General Manager Temel Kotil has announced that as of June they will begin flights to Buenos Aires connecting in Sao Paolo.

Kotil held a meeting with Argentina's Minister of Tourism Carlos Enrique Meyer at the Atatürk Airport VIP Lounge. Meyer was in Istanbul for the 16th East Mediterranean Tourism and Travel Exhibition (EMITT).
Following the meeting, Kotil told members of the press that as of June, Turkish Airlines will begin flying to Buenos Aires connecting in Sao Paolo.

Kotil explained that they will begin by offering four flights a week, in which they will also be able to fly passengers to and between both Sao Paolo and Buenos Aires, and thanked Brazilian and Argentinean officials for offering them this opportunity.

''Great business awaits us," states Kotil who explains that they are starting off with just four flights a week due to the restriction of slots in the Sao Paolo airport and that once the restriction is lifted, they hope to begin offering flights every day."