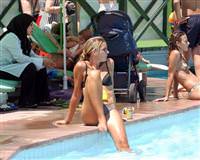 Visitors from Iran, which used to provide the fourth highest number of tourists to Turkey, are no longer.

The sanctions issued by the United States and Europe on Iran have resulted in transforming the public into introverts. Iran, which used to send 1.8 million tourists to Turkey a year, making them the fourth country with the highest number of tourists that travelled to our nation is now suffering a serious drop in currency value in comparison to the dollar. Due to the political instability, the riyal has devaluated by approximately 50 percent over the past two months, resulting in the significant drop in visitors.
The number of visitors to Turkey from Iran in February dropped by 40 percent, regressing from 104,000 to 67,000 tourists. This trend continued in March despite anticipations that figures would increase due to Nevruz. This March showed an approximate 60 percent drop in the number of Iranians to arrive in Turkey's coastal regions and Istanbul. Meanwhile, supposedly ten Turkish travel agencies which worked exclusively with Iran have since gone bankrupted.


According to Gül Çakıcı, the Iran market official for Bedir Tourism, it is now practically considered a crime to have dollars. Çakıcı explains that even Bank Mellat has stopped trading in dollars. Çakıcı states, "We end up exchanging riyal for dollars at jewelry stores. A number of companies are facing tough times because they are unable to get paid. Ten companies have gone down since February."

HOTELS IN ISTANBUL AND ANTALYA ARE EMPTY

While Iranian tourists used to spend their Nevruz vacations in Turkey significantly filling hotel capacity, with the 70 percent drop experienced this March, there were just 20,000 tourists who came to Turkey from Iran. Hotels in Istanbul and Antalya which generally block off rooms for Iranian visitors ended up empty during Nevruz.
Mediterranean Tourist Hoteliers and Operators Union (AKTOB) Chair Sururi Çorabatır explains that there has been a visible drop in tourist numbers from Iran since Nevruz up until now and states, "We did not reach the capacity we expected. As a result of discussions held, we have learned that the Iranian public has turned towards their own nation due to the international embargo and its effects on the economy. We hope this will not last long," states Çorabatır.

According to the owner of Shida Tourism Shida Çetinkaya, the deciding factor of whether Iranians will or will not come to Turkey is dependent on the currency exchange. Çetinkaya explains that until things return back to normal, Iranians are now focusing on domestic tourism. Çetinkaya says, "Due to the inflated value of the dollar, in addition to travelling, spending on products has also come to a halt. Everyone is holding on to their money and nobody is favoring spending."