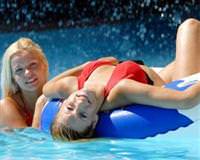 Russian tourists are flocking to Turkey’s beaches, using the nation’s May 1st Spring and Labour Day and May 9th Victory Day as an excuse to vacation in Kemer, a popular resort town in Antalya.

Russian tourists have used the opportunity of combining Russia's official May 1st Spring and Labour Day and May 9th Victory Day to fill hotels in Kemer. All of the popular resort town's facilities are fully booked up until May 14th.

A series of events have been organized in the resort's touristic facilities and nightclubs, including performances by Russia's famous DJ's and musical performers. As preparations ensued for the night's festivities, Russian tourists flocked to the beach to enjoy the sunny weather and sea. The beauty of the Russian beauties did not go unnoticed.

FACILITIES ARE AT FULL CAPACITY

Majesty Mirage Park Resort Hotel General Manager Şinasi Gürocak explains that they began receiving customers at the end of April; however they are completely full for the month of May due to the coinciding of two official holidays in Russia. Gürocak explains that they have reached the same level of capacity as they did in 2011. "I believe that this season will be just as good as last season. Due to the hot weather Russian tourists tend to prefer to vacation in our district. Right now Kemer is celebrating Russia's holidays." Majesty Kemer Beach Hotel General Manager Ülkay Atmaca says that they started the season early due to the Russian holiday season and all rooms are currently filled.