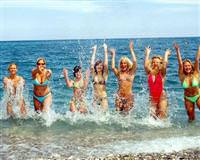 The 30-day period allotted for Russian tourists to travel to Turkey visa-free has now been raised up to 60 days.

The Council of Ministers has decided to increase the 30-day period allotted for visa-free travel by foreign nationals up to 60 days. The visa-free day allotment, which also includes the stipulation that 90 days not be surpassed out of a total 180, has been released in the Official Gazette.

The historical step to increase the one-month visa-free period between Russia and Turkey to two-months was based upon requests by Russian tourists to extend their stay.

According to the Russian news portal www.mk-turkey.ru, which delivers news on Turkey in Russian, both nations Russia and Turkey are pleased with the mutual lifting of visa regulations for visiting tourists and Ankara has now offered the proposal to Moscow to increase the one-month period up to two months. Moscow is currently evaluating the proposal. Despite not yet receiving a definitive response from Moscow, Ankara has gone ahead and one-sidedly raised the visa-free period up to two months for Russian tourists.

Last year, the number of Russian tourists to visit Turkey was record-breaking at 3.5 million. The target for 2012 is to reach four million Russian tourists. According to figures from the Ministry of Tourism, the contribution of a single tourist to a nation's economy is 1,000 dollars.